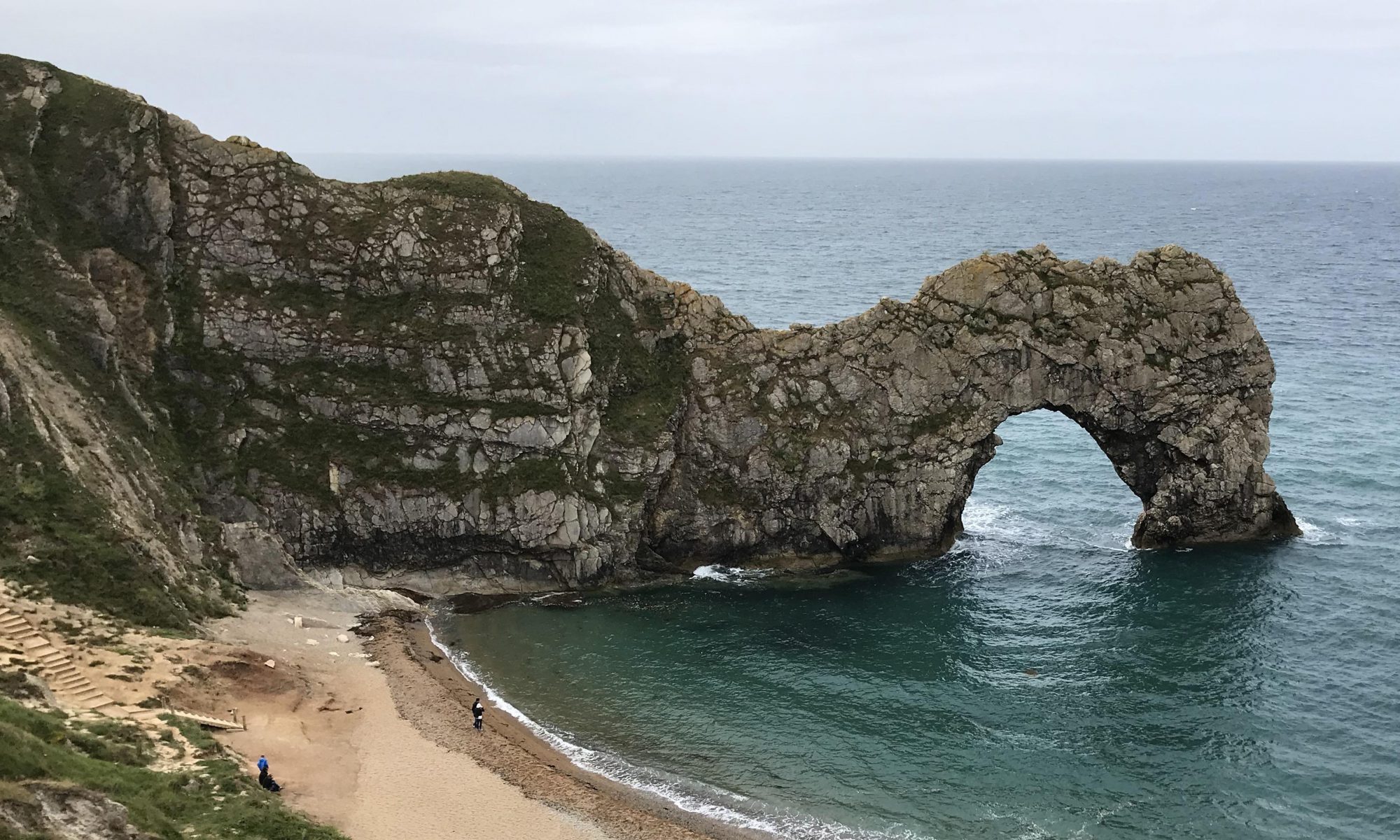 In June, after the mad rush of exams and vivas, I found myself back at my secondary school in Birmingham, boarding a coach with some of my old geography teachers and over 60 Year 10 students. I had been asked to come along to highlight some of the amazing geology on show along the Jurassic coast.

This was a Geography GCSE trip for the students – collecting data and practicing fieldwork techniques for both human and physical geography – but, most excitingly for me and the reason I was coming along, we were heading for Dorset, visiting many of the locations I had been to a couple of years earlier on the IB field trip with the Department. There were visits to the Isle of Portland and Chesil Beach, Durdle Door and Lulworth Cove planned for the weekend.

We drove down in glorious sunshine with stunning views along Chesil Beach as we arrived. After digging out my Dorset IB field guide, we found some of the impressive ammonites that help form the wall of the hotel on the Isle of Portland. It is these sorts of things that the girls don’t necessarily associate with Geology or Earth Sciences, so I was keen to make them realise what a varied subject it is. Of course, this was a geography, not a geology, trip so I had a bit of time to enjoy some of the topics that I hadn’t studied since GCSE or A-level.

During the weekend, we spent an hour or two looking at farming diversification at Craig’s Farm Dairy in Osmington (and eating them out of salted caramel ice cream), making land use surveys around a commuter settlement called Puddletown (appropriately named as it was raining at the time) and discussing coastal defence schemes in West Bay, which I recognised when we arrived as the location of the Bridport Sand cliffs we visited in IB. I’m fairly sure I still have a disintegrating belemnite in one of my bags of rocks that came from there!

There was a lot of work done on beaches in the area – notably the dunes in Studland Bay, where some of the students got their first close-up look of sand through a hand lens, and of course in Lulworth Cove, where the task was to measure beach profiles. Lulworth Cove and Durdle Door were great locations to look at the different lithologies in the area and link in the geology to the physical geography the students had been learning about. They all knew exactly what to look for, and the role of limestones, clays and sands in forming the structures seen today, which was really great to see. They were introduced to field sketching at Durdle Door, and discovering my pretty poor attempt in my IB notebook I spent some time drawing a slightly better version and discussing the vertical bedding planes and folding in the region with some of the girls, setting up the background for Stair Hole later in the day.

The day around Lulworth was of course my favourite, and I also had a chance to talk to some of the girls about general topics in Earth Sciences and questions they had (possibly distracting them from making beach transects!). We spoke about deep Earth structure, the origins of the Earth, meteorites, the early Solar System and giant planets, the Earth’s magnetic field, and all sorts of different volcanoes – they had very interesting questions, and it was a lot of fun to talk about the parts of the subject that I really enjoy and challenge them to think about how we know the answers to the questions they came up with. Hopefully I managed to surprise them a little about the breadth of topics that you can study in an Earth Sciences degree!

Overall it was a wonderful weekend, and I hope the girls and other staff enjoyed it as much as I did. It was great to see how Earth Sciences can be linked in to the Geography curriculum and do a little bit of outreach in the process!