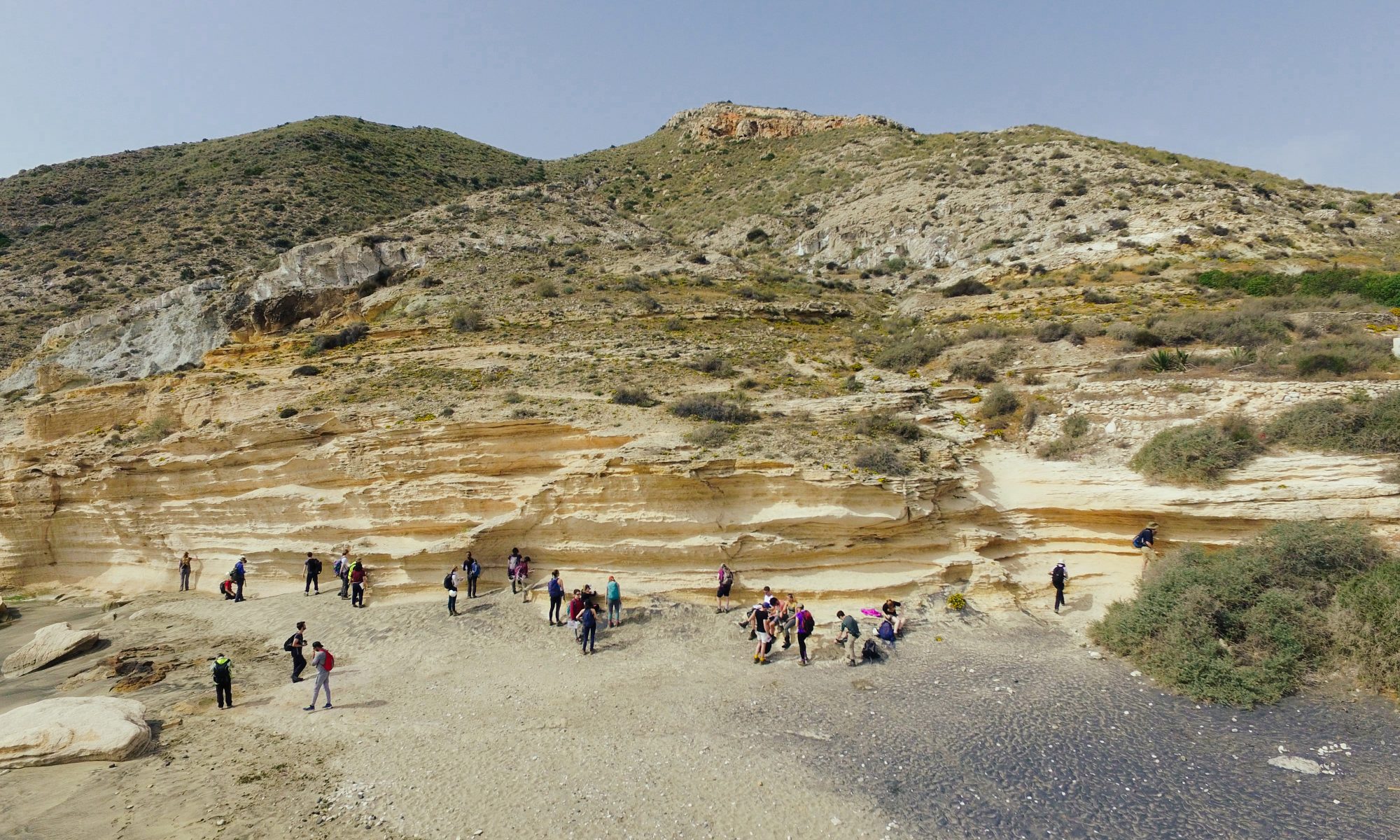 The last field trip that our undergraduates take is the fourth year, Part III trip to Spain. Run in the break between Lent & Easter term the trip aims to gather all the aspects of the course and put them together as a cohesive whole. Other trips focus on specific research areas: e.g. Sedimentology and Petrology – the 1B Southwest trip to Dorset & Cornwall, or Geophysics in Greece, or developing mapping skills in Sedburgh & on Skye. The Spain trip can be seen as the closing bookend to our students’ discovery (and love) of geology that begins on the first year trip to the Isle of Arran.

We travel around the various sites of geological interest in people carriers driven by our chief demonstrators. There is friendly competition between each van to have the best music playing during the drives to and from each location. The human landscape is made of small towns and villages surrounded by acres and acres of poly tunnels. There’s also the expected olive trees and orange groves. The natural landscape appears barren: scree, bare rock, dust, save for the dense scrub that covers mountains and hills in patches. Nearly everywhere – beautiful views. During one of our lunch stops we could see snow covered sierras in the distance.

Our home from home is an apartment complex right on the beach in the town of Carboneras. The students and demonstrators split into groups of five or six to each flat. One of the demonstrators’ apartments has a room large enough to accomodate us all for the evening student presentations and the demonstrator sum-up talks on what we’ve seen and done during the day.

We were there in April and for the most part we had beautiful weather. Some of the days would start overcast and quite grim looking but then almost always by the end of the day the blue sky and the sun would be back, allowing the very, very keen in our party to brave the waves and water temperature for an evening swim. The air temperature was around 20 degrees Celcius everyday and I’m prepared to be contradicted but I don’t recall a single drop of rain falling on us during the whole trip. However. Boy did it blow a hoolie! Strong, unrelenting, unceasing, impressive, gusting, mighty, mighty wind.

We start our first full day of geologising with an overlook of the Sorbas basin. What is the geological history, what happened and when, and how we use our geological knowledge to deduce these things – what does the rock say? This first stop allows for the maiden flight of The Drone. This excursion gave Professor Nicky White the opportunity to carry out some unique surveys of the area via drone for the first time.

The Drone – or rather Nicky’s athletic prowess in the capture of it on landing – became the source of intense fascination and amusement; culminating in a dance choreographed and performed by the students at the end of the trip. See video for Day 6 near the end of this post.

Our days take on a routine. We breakfast, get our picnic lunches sorted out and are heading off in the vans to field locations by nine o’clock. Just in case you’re wondering, the van I was in also happened to have the best playlist (thank you Kev). We’ll stop in one or two areas before lunch and then do the same again in the afternoons. For those uninitiated our trips generally consist of walking to a place of interest and the students are left to their own observational devices. After fifteen to twenty minutes the lecturers and demonstrators will summon everyone and debrief on the outcrop. Discussion and questions are very much encouraged during this time.

Once back, between five and six in the evening, there’s time for a quick wash, a trip to the supermarket to stock up on provisions for lunches and dinners for the next couple of days. There might also be time for a swim and perhaps a quick gin & tonic too. The students who have volunteered to give the talk that evening will usually spend an hour or so preparing for their presentation with the help of at least one or two demonstrators with expertise in the subject.

Student talks and demonstrator sum ups of the day occur at around seven o’clock in the evening and will last for about an hour. There’s usual two or three talks by students of around five minutes each, questions and discussions will follow on. Before we break up for dinner one or other of the teaching staff will give an in depth explanation of what we’ve seen during the day.

Dinner time is when we go our separate ways for the day. Demonstrators going one way for a dinner of tappas with beer or sangria in one of the local restaurants, my mouth waters remembering some of those tasty little plates of delight. Some of the undergrads will go out but for the most part tend to stick to the complex going in and out of each other’s flats and creating a convivial, relaxed atmosphere. In the middle of our stay we had a barbeque in the central courtyard of the apartment complex, with many joining in the cooking on one of the two (3?) large barbeques provided. I may very well have danced after the food was eaten. On the evening before last the whole group goes out for a paella.

The trip is a wonderful final excursion for our students; it does bring a lot of the geological material together, but it also displays the life skills they’ve developed over the four years they’ve spent in the Department. There’s a cameraderie, a sense of shared experience and knowledge that can only come when a group of people have had the same experiences together. They’re all grown up now. Mostly.

Thank you to all the students & members of the Department for making it possible for me to go on this trip and allowing me to take far too many pictures of them. A special thank you to Professor N. J. White for the use of some of the drone footage.