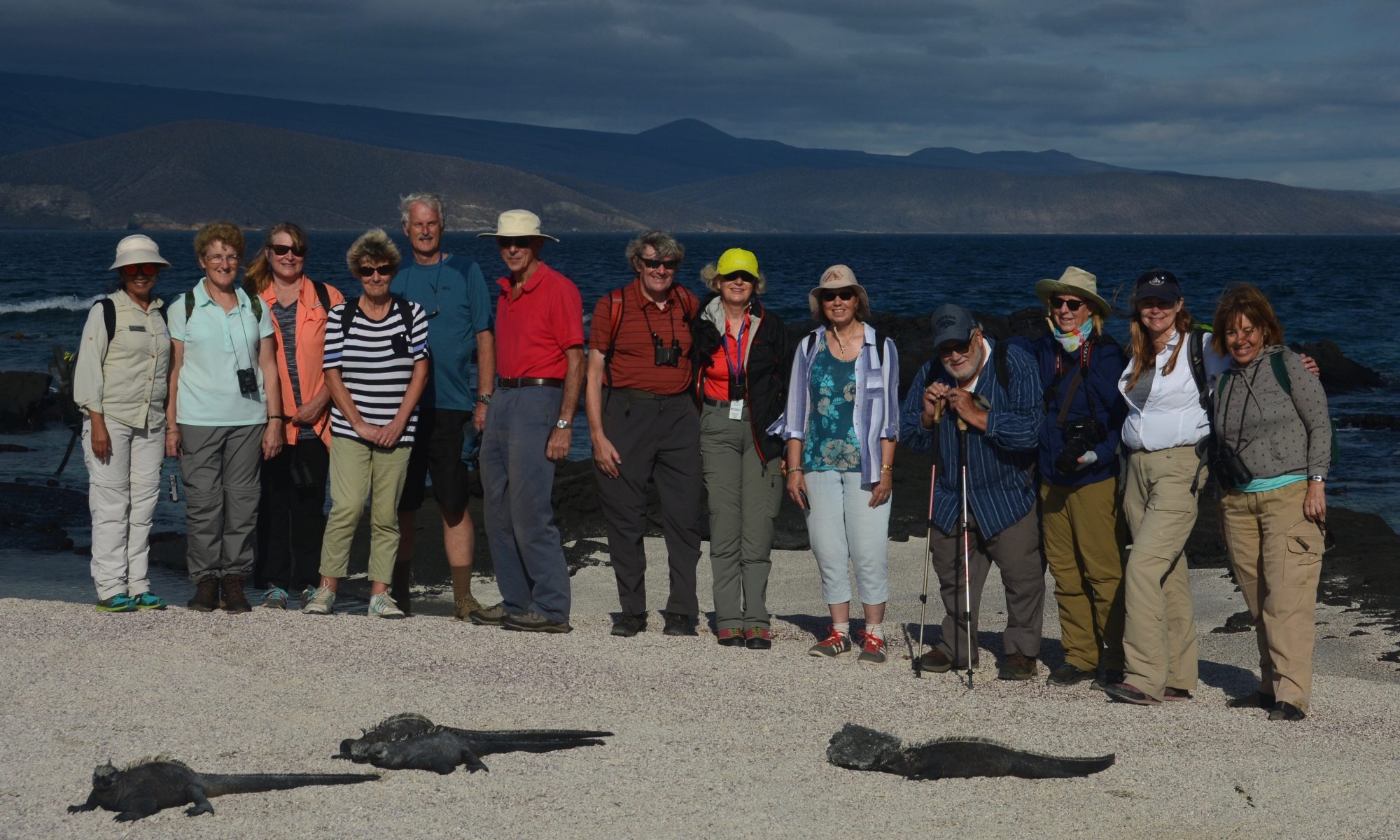 The joint Cambridge-Oxford Universities Alumni trip to Historic Quito and Galápagos in September 2018 was the first time I’ve acted as a Trip Scholar. From the outset, I was intrigued as to who would be in the group and how the dynamics would work. I could not have been more pleased with the way things turned out….

The Alumni group consisted of 7 ex-undergraduates plus spouses, from the US and UK. The party was smaller than I‘d expected but meant we rapidly became a coherent tight-knit group, who did pretty much everything together. Most of the group had a scientific background and all had fond memories of their times studying at Oxford and Cambridge. This was ultimately what united us all.

We met up in Quito – I’d visited the city several times before but this mainly involved obtaining export permits for rock samples and hanging out at airport cargo depots. It was always apparent that Quito had so much more to offer and the Alumni trip was a great way to find out about the amazing colonial history of the city – from its ancient gold filled cathedrals to Ecuador’s herbal medicines and growing modern-day chocolate industry. Part of our tour included a visit to the new Museo Nacional del Ecuador with its incredible display of gold objects in the Sala de Oro.

After two days sightseeing in historic Quito we flew to Galápagos, which provided me with a wonderful opportunity to share my passion for Galápagos volcanoes and their relationship to the flora and fauna.

The cruise ship, Santa Cruz II, was much larger and more luxurious than the research vessel I’ve become accustomed to in Galápagos. This enabled us to travel around the archipelago overnight and so each morning we awoke to a new vista of volcanic landforms. As Charles Darwin experienced aboard HMS Beagle in 1835, the Pacific waters can be slightly choppy and a few green faces emerged at breakfast. Despite this, everyone was fully engaged with the activities (snorkelling, short hikes and boat trips to see lava flows and wildlife).

It was hugely inspirational for me to give lectures about both Galápagos volcanoes and the places where Charles Darwin made some of his most important scientific observations, while actually in the archipelago. During one of my lectures, lavas that had flown down the slopes of surrounding volcanoes in the previous 12 months were clearly visible from the cruise ship’s windows – we were literally in the cauldron of fire! What an amazing and unforgettable natural lecture theatre.

A real trip highlight was when our small inflatable boats were surrounded by a huge pod of bottlenose dolphins.

My desire to point out the volcanic landscapes of the surrounding islands of Santa Cruz and Floreana was soon over taken by the need to marvel at these wonderful creatures, which are attracted to this part of the Pacific by the productive waters that converge on the Galápagos volcanic platform.

Our 5 days in the Galápagos coincided, almost to the day, with the 183rd anniversary of the arrival of HMS Beagle in the archipelago. Little has changed on many of the islands since this time. Their unique ecosystems are still as fragile as in 1835. Human occupation continues to pose a threat but this is now in the form of tourism and illegal overfishing rather than the tortoise hunters that Darwin met during his stay. Fresh water remains in short supply and in addition to the active volcanism, the location of the Galápagos Islands on the Equator makes them extremely vulnerable to climate change associated with El Niño events. Despite all of this, the animals and birds are fearless of humans, providing the party with unrivalled opportunities for close encounters.

Galápagos is a truly unique natural laboratory in which scientific studies continue to yield important insights into the physical and chemical processes operating within the solid Earth and how these influence the evolution of species that inhabit its surface.