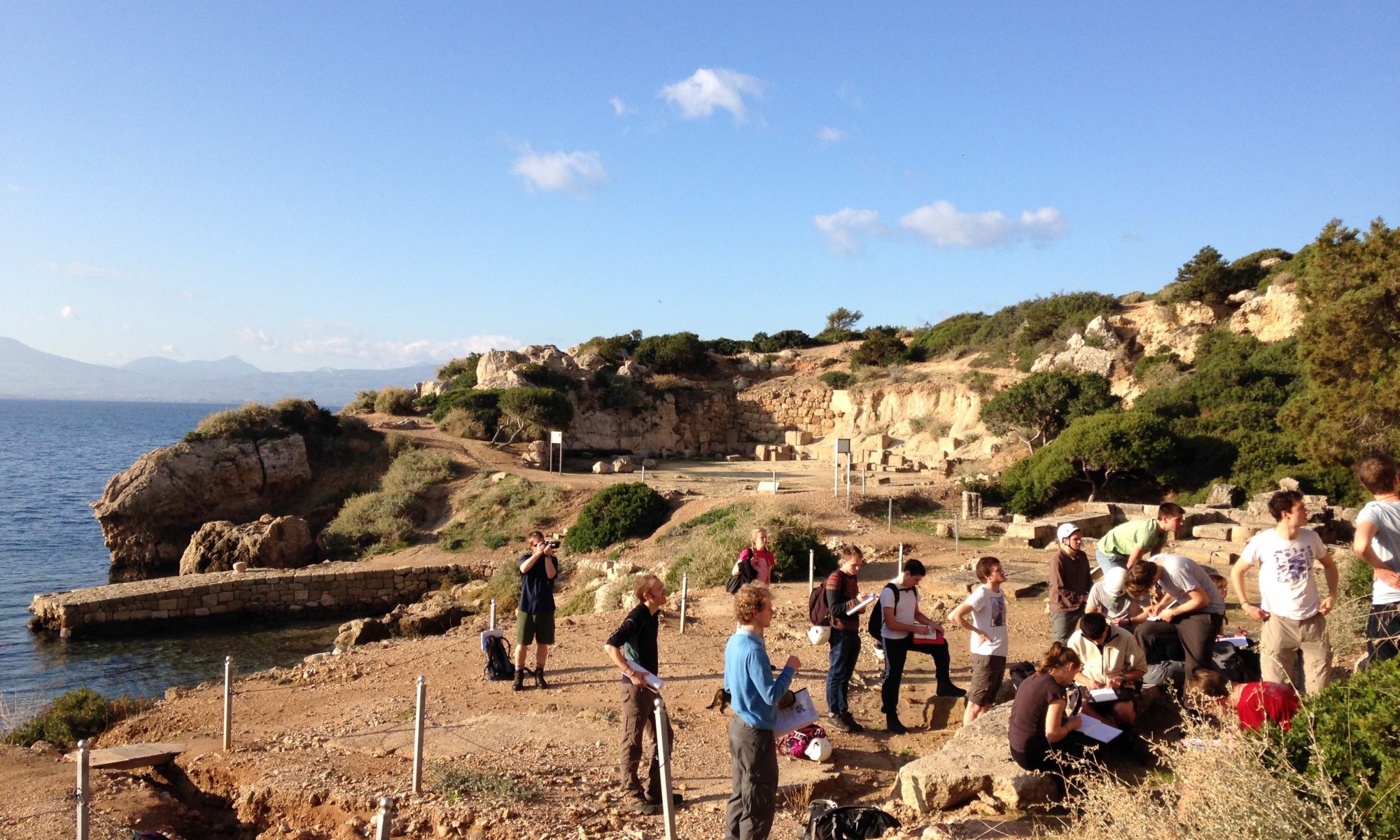 The fastest extension on Earth, fault-controlled coastal motions and even the possibility of some winter sun: what better way to consolidate the Part II geophysics course than a field trip to Greece?

Our trip began on the shores of the Gulf of Corinth, tracking coastal vertical motions from three earthquakes in 1981. A beautifully sunny Saturday provided the perfect backdrop to the group’s introduction to Lithophaga borings, coastal notches and spectacularly exposed fault planes. Our consideration of the relationship between faulting and drainage was interrupted, however, by our arrival at the Bambekies fan, where we found that the buried church mentioned in last year’s blog had miraculously disappeared…

The majestic, uplifted Gilbert delta we encountered on day two highlighted the importance of sedimentology in understanding active tectonics. We introduced an element of palaeontology to the story on day three with the discovery of a conclusively marine and previously unobserved bryozoan in the carbonate cap of the isotope stage 5e Corinth terrace.

From uplifted terraces we moved to subduction volcanism at “Volcano World”. The fumeroles were on impressive form, spewing dense plumes of hydrogen sulphide down hills littered with gypsum crystals. Complacency about the muddy terrain set in, however, at the last outcrop of the day, a railway cutting containing a dacite flow. As we tried to leave the outcrop wheels started spinning and sliding, requiring a mass-MPV-pushing effort which eventually freed the van at the cost of a face full of mud for one of the students.

On day four we finished investigating the 1981 earthquake sequence and travelled north to the Gulf of Evia, site of the impressive Arkitsa (“rubbish dump”) fault. Day five began with an overview of the Gulf, looking at an, alarmingly local, exposure of the Kamena Vourla fault and the associated hot springs. In the afternoon we came to possibly the most exciting stop of the trip (certainly for Alex and Christoph) – the Parnassos/Bralos drainage divide – bringing levels of geomorphological enthusiasm, and student bemusement, to an all-time high.

After a low-visibility study of Tethyan geology the group split for the final day, some to map melange and others to explore coastal vertical motions to the east. Excitingly, the latter group found uplifted Lithophaga borings on the Arkitsa shoreline, possible evidence for a recently active offshore fault. Our travels also brought us into contact with the most paranoid petrol salesman in Greece and a bizarre peninsula covered with abandoned opulent houses, networks of long staircases and a seemingly inescapable series of dead end roads.

We returned to Cambridge filled with baklava-fuelled enthusiasm for geophysics. The Greece trip has something for every earth scientist – making clear the importance of different disciplines, from mineralogy to palaeontology to seismology, in piecing together the puzzles of active tectonics.