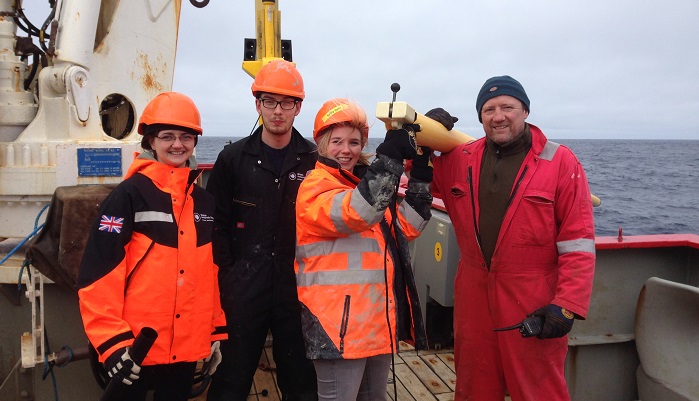 During February 2015, I was lucky enough to participate in a research cruise off the west coast of the Antarctic Peninsula. For five weeks our family of geologists, geophysicists, oceanographers and crew collected data, mainly seismic and cores, on the James Clark Ross research vessel.

The adventure started on the 23rd January with a 36 hour journey door-to-door from Cambridge to Punta Arenas, Chile. Once in Punta, I had a few days to settle into boat life and find my sea legs, before we set sail through the Straits of Magellan, down the east coast of South America and into Drake’s Passage. I was expecting a baptism by fire as we sailed through Drake’s Passage, sitting in the “Furious Fifties” latitude zone and known as the roughest sea in the world, however lady luck was shining on us and we had no trouble.

Once we arrived at our first site, work began and I settled into a daily routine. My role on the cruise was tied to my PhD, which studies a relatively new discipline called Seismic Oceanography; a combination of geophysics (namely the seismic reflection method) and physical oceanography. Seismic acquisition uses a source to release acoustic energy beneath the water surface which is reflected off changes in density and sound speed and recorded by an array of receivers. The recorded data is processed, enhancing signal and reducing noise, to produce a final image that essentially maps variations of the temperature and salinity field. Each scientist had a shift time during which they needed to be available in the main instrument room. My shift usually started at 4am, which meant I always caught the beautiful sunrises and, some might say, more importantly, made friends with the cooks. Everyone was working hard, but the boat also had a great social atmosphere, involving a lot of food and drink, giving a good balance between work and play.

Life ticked on in our boat bubble for a few weeks; it is an odd sensation to be able to walk as far as physically possible in under a minute! Being in the Southern Ocean made us realise that this was probably the furthest we will be from anything else ever in our lives – for a week we were so far south that we had no email/phone communications whatsoever! During the same week I also saw some of the most beautiful sights; whales, horizons filled with icebergs and stunning sunrises. Four weeks after leaving during our usual 2pm science meeting, we were informed that we needed to pick up some new passengers from Rothera Research Station… we were making an unexpected trip to Antarctica!

Sailing into Rothera we experienced the best weather of the entire cruise, bright sunny skies and flat calm seas. Having never been to Antarctica before I didn’t know what to expect, the best way I can describe it is that it looks like a low-lying, pristine ski resort. Once we had come into port, everyone was itching to get off but there were a few practicalities delaying us. Eventually we were off, visiting the Rothera merchandise shop (lots of mugs were bought) and taking a guided walk around the point. We got to meet the ‘locals’ and, as the weather gradually deteriorated, see Rothera in all seasons. The day was incredibly exciting and surreal, hopefully the pictures do it justice.

A short but sweet trip to Rothera was signed off by the biggest storm so far. The captain sheltered the boat to try and avoid the worst, yet during the night I woke up many times as me and my mattress slid up and down the bed frame and loose objects flew about the room. The next day, walking and showering became interesting challenges and unfortunately our new guests were definitely experiencing a baptism by fire.

After the storm we began the journey back to Punta, at which point the realisation that our adventure was all over started sinking in, resulting in several end of cruise events. The five weeks on board were an amazing and unique experience which I thoroughly enjoyed… bring on the next one!