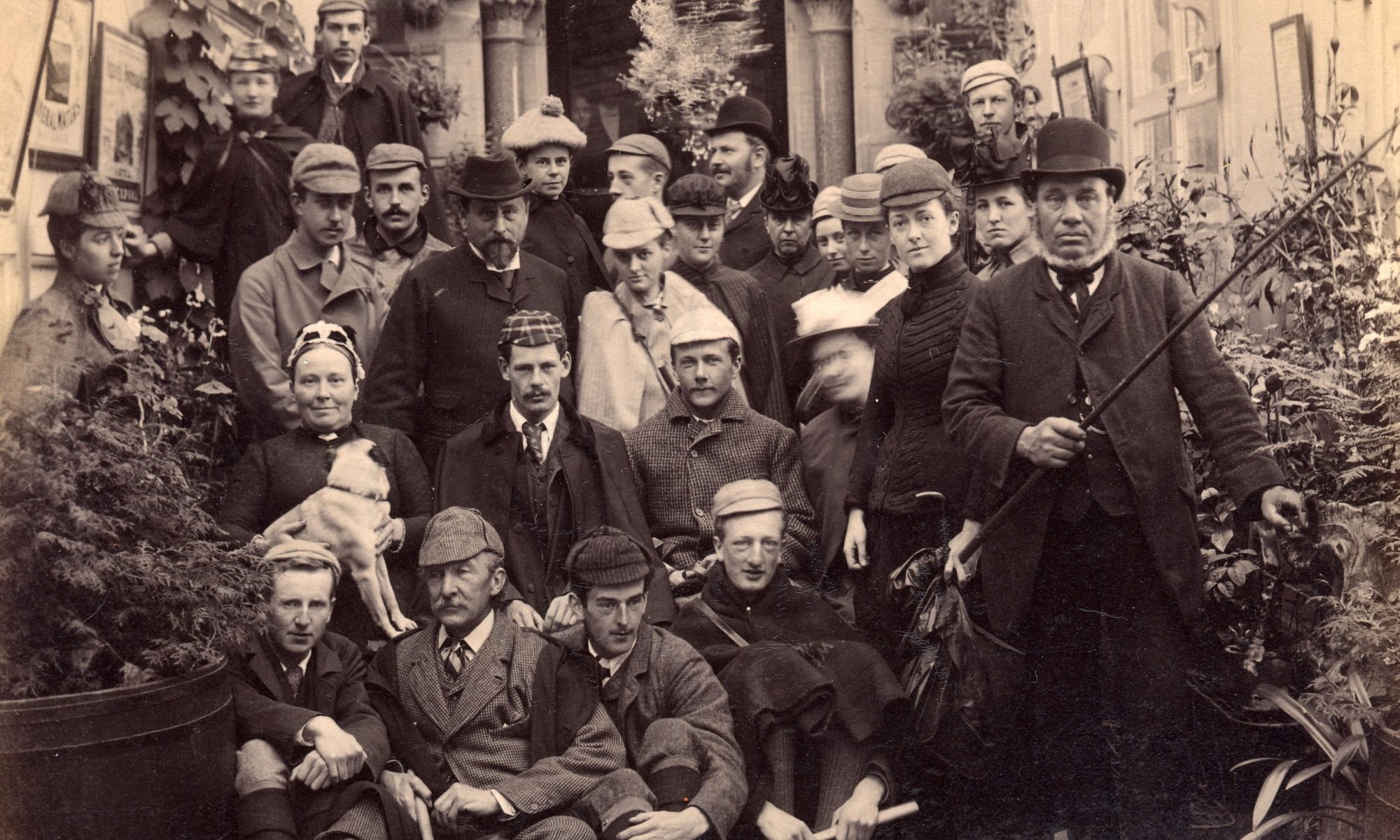 A hundred years ago Thomas McKenny Hughes (1832-1917) died. He was Adam Sedgwick’s successor as eighth Woodwardian Professor and his biographer. Today, although few geologists, even in Cambridge, will have heard of McKenny Hughes, he made his mark on British geology. It was McKenny Hughes who managed the planning and building of the Sedgwick Museum and he fostered the training of successive generations of geologists who in turn helped develop geology as we know it today.

The successful establishment of the Sedgwick Museum in 1904 was much more than the construction of a fine building filled with one of the most historic collections of fossils in the world. The new Sedgwick Museum formed the core of a nascent Department of Earth Sciences. And, it marked the permanent establishment of geology within the natural sciences as taught, examined and researched within the University of Cambridge. Much of this achievement was due to Thomas McKenny Hughes, assisted by some very able scientists – T.G. Bonney (1833-1923), J.E. Marr (1857-1933), A. Harker (1859-1939) and latterly R.H. Rastall (1871-1950), G.E.Elles (1872-1960) and T.C. Nicholas (1887-1989).

McKenny Hughes may not be remembered these days for his geological work but he had been recruited to the Geological Survey in 1861 by the then Director General, Sir Roderick Murchison. And, he worked for a decade on the ‘drift deposits’ of Hertfordshire before being transferred to the Lake District where he met his future wife.

It was McKenny Hughes’s meeting with Charles Lyell in the 1870s that marked another turning point in his life. Lyell encouraged him to enter the competition for the Woodwardian professorship, which had become vacant in 1873 upon the death of the 88 year-old Adam Sedgwick. Sixteen years earlier, as an undergraduate in Trinity College, McKenny Hughes had attended Sedgwick’s lectures on geology. Lyell’s advocacy of his protégée may have been significant in the final choice of McKenny Hughes from a field of nine candidates, one of whom was the eminent and well established geologist T.G. Bonney.

As incoming Woodwardian Professor, McKenny Hughes inherited a somewhat moribund Geology Museum in the Cockerell building near Senate House stuffed with more specimens than it could sensibly house. Sedgwick had been in declining health and energy for the last decade and more of his professorship. At times his lecture course had to be given by his assistant Harry Govier Seeley (1839-1909) and anyway Sedgwick’s experience and understanding of geology had not progressed much beyond that of the 1840s.

Building a Department of Geology

As someone with Cambridge college experience and background in diplomacy, albeit briefly as secretary to the British Consul in Rome (1860-1), and good if not outstanding geological credentials, the 41 year old McKenny Hughes turned out to be an excellent choice and was instrumental in reviving the study of geology in Cambridge. It was Mckenny Hughes who appointed the 25 year-old Alfred Harker in 1884 to teach the newly emerging science of petrology. It was McKenny Hughes who, in 1886, appointed J.E. Marr as lecturer in geology and it was Marr who was to become the next Woodwardian Professor in 1917.

Field work and the Sedgwick Club

The development of fieldwork has been integral to the study of geology from its inception as a science. Sedgwick had taken students into the field, mostly on horseback but McKenny Hughes took this form of instruction much further. The advent of an efficient railway system  allowed the organization of field trips to different locations around the British Isles facilitated by the opening of a direct line to Kings Cross in 1866 and a line northwards to York in 1882.

The foundation in 1880 of the Sedgwick Club, an undergraduate geological society, was supported by McKenny Hughes, Marr and Harker. It was the Sedgwick Club that ran the yearly field trips and from 1883 these were often attended by the Woodwardian Professor and his young wife. In 1882 the University had revoked the ban on marriage by fellows. McKenny Hughes promptly took the opportunity to ask Mary Caroline Weston, the daughter of a Westmoreland vicar, to marry him. Although she was only 22 and he was 51 years old, ‘Carrie’, as she was known to her family, accepted him and was thrown into the domestic and academic life of a Cambridge professor. In 1883 the then married Professor McKenny Hughes was elected a Fellow of Clare College.

Mrs McKenny Hughes was no ordinary young woman, she already had an interest in natural history and showed this by accompanying her husband on Sedgwick Club field trips. Her presence made it possible for successive year classes of female undergraduates to attend. With the foundation of the women’s colleges of Girton (1869) and Newnham (1871) there were young women who were actively interested in geology. By the 1890s some of them, such as Gertrude Elles (1872-1960), were joining the profession of geology as researchers and lecturers. Within six years of her arrival in Cambridge Carrie had also authored the first academic results of her of her geological interests – an article in the Geological Magazine ‘On the Mollusca of the Pleistocene Gravels in the Neighbourhood of Cambridge’. Carrie helped change the face of Geology in Cambridge and the long process of promoting the access of women to the profession.

The death of Adam Sedgwick in 1873 had prompted a public appeal to develop a suitable memorial to the 7th Woodwardian Professor who had done so much to raise the profile of geology in the University and give it a national significance. By 1878 over £12,000 had been raised, including 15 guineas from a Dr C. Darwin. However, it was to take McKenny Hughes another 26 very difficult years of negotiation to steer the project through the procrastination and indecision by University committees before anything came of it. The first architect, Sir Arthur Blomfield, was chosen in 1880 and drew up plans but these were abandoned on the grounds that there was neither room nor money for his ambitious scheme.

By 1890 there had been a further three architects and at least six sets of plans but no result. In 1891 McKenny Hughes formed a new ‘Memorial’ committee, which included four geologists and the Vice Chancellor, John Peile, a University reformer. They drew up a list of six possible architects, including the newly knighted Irish architect Sir Thomas Deane who designed the Oxford University Museum of Natural History, the Trinity College Dublin Museum and Queen’s College Cork. However, when it came to a vote it was T.G. Jackson who won a clear majority. He was known as ‘Oxford Jackson’ because of all the work he had done for Oxford University including the commission for the New Examination Schools, which he had won by competition but he was largely unknown in Cambridge.

Even then, with an architect finally in place, the process was somewhat tortuous. New plans had to be drawn up and costed. McKenny Hughes managed to get the site changed to a more capacious one on land bought from Downing college. The University wanted the cheaper and less ambitious scheme whilst the Memorial committee insisted on the more ambitious and more costly one –  £36,500 as opposed to £34,000. McKenny Hughes had to threaten to resign and it was February 1899 before the final go-ahead was given.

Even then, the chosen plan evolved and was refined. But at least it was as a result of cooperation between Jackson and McKenny Hughes rather than further outside interference. Jackson’s memorial design represented a departure from the Victorian Gothic, which prevailed in the University at the time. The building was designed to accommodate over 200 students and staff as well as the displays of rocks, minerals and fossils. Adjacent to the main museum exhibition area were the lecture rooms, library, workshops and staff rooms, all necessary for the development of the emergence of geology as a modern science. In addition, the extensive third floor attic was designed as an open area storage space for the bulk of the research collections.

Jackson’s pioneering resolution to the problems presented by all these different needs was to design one of the first steel frame structures in the country. It had to bear a considerable and ever increasing load of rocks and fossils, especially on the top attic floor. But this ‘industrial engineering’ solution was concealed to external view.

Jackson was an ‘Arts and Crafts’ architect inspired by English Tudor and Jacobean buildings with a penchant for Flemish gables and cupolas. He combined different coloured bricks with a variety of rock types for various specific purposes. Geological and architectural interests came together and Jackson hoped that his building would become part of student’s geological education. Jurassic age Clipsham and Rutland limestones were used for window frames, external staircases and decorative features whilst Devonian age Caithness Flags form the external stair treads. Cretaceous Weald Clays from Cranley in Surrey provided the main external purple-grey brickwork along with red brick window arches from Castle Hedingham in Essex. Internally, Purbeck, Portland and Ancaster stone was used for steps, fire-surrounds and decorated arches.

Jackson involved himself in every detail from the design of the brass door fittings to the sculpted animals, which adorn much of the stonework, and even the weather vane atop the cupola. The latter is a gilded ichthyosaur and it has become something of a city landmark. Elsewhere, the stone bestiary ranges from an ‘Ice Age’ woolly mammoth, bison and bear to pterosaurs and an Iguanodon.

Open at last to a changing world

By the time the Museum was opened on March 1st 1904 by King Edward VII and Queen Alexandra, McKenny Hughes was a tired 72 year old. But the Woodwardian professorship was for life and so he ‘soldiered’ on. A welcome relief was the discovery of the Barrington hippo in 1910.

Although a variety of Ice Age mammal bones had been discovered in diggings around Barrington from the 1880s, they were mostly isolated bones. Finding and then recovering a complete hippo skull, articulated backbones, pelvis and limb-bones of more than one of these very large mammals was exciting. It also required a considerable effort by all members of the Department including the professor. The reward was well worth it with the reconstruction of a virtually complete skeleton to accompany the Sedgwick Museum’s other Ice Age animals, such as the giant deer skeleton from Ireland, which had been bought by Sedgwick nearly a hundred years before in 1835.

But within a few years, the outbreak of the First World War made McKenny Hughes’s personal and professional life increasingly difficult, as it did for so many families caught up in the catastrophe of war. In 1914 there was a haemorrhage of University students and staff into the armed forces as the University was put on a war footing. Thomas McKenny Hughes’s beloved Carrie had become seriously ill and died in 1916 at the early age of 56. Her husband died a year later, aged 85. At least they did not have to face the loss of their second son Thomas who was killed whilst on active service on the Western Front in 1918. It was McKenny Hughes’s colleague, the 60 year-old J.E. Marr who became the 9th Woodwardian Professor in 1917.

Douglas Palmer
All photos © The Sedgwick Museum of Earth Sciences.