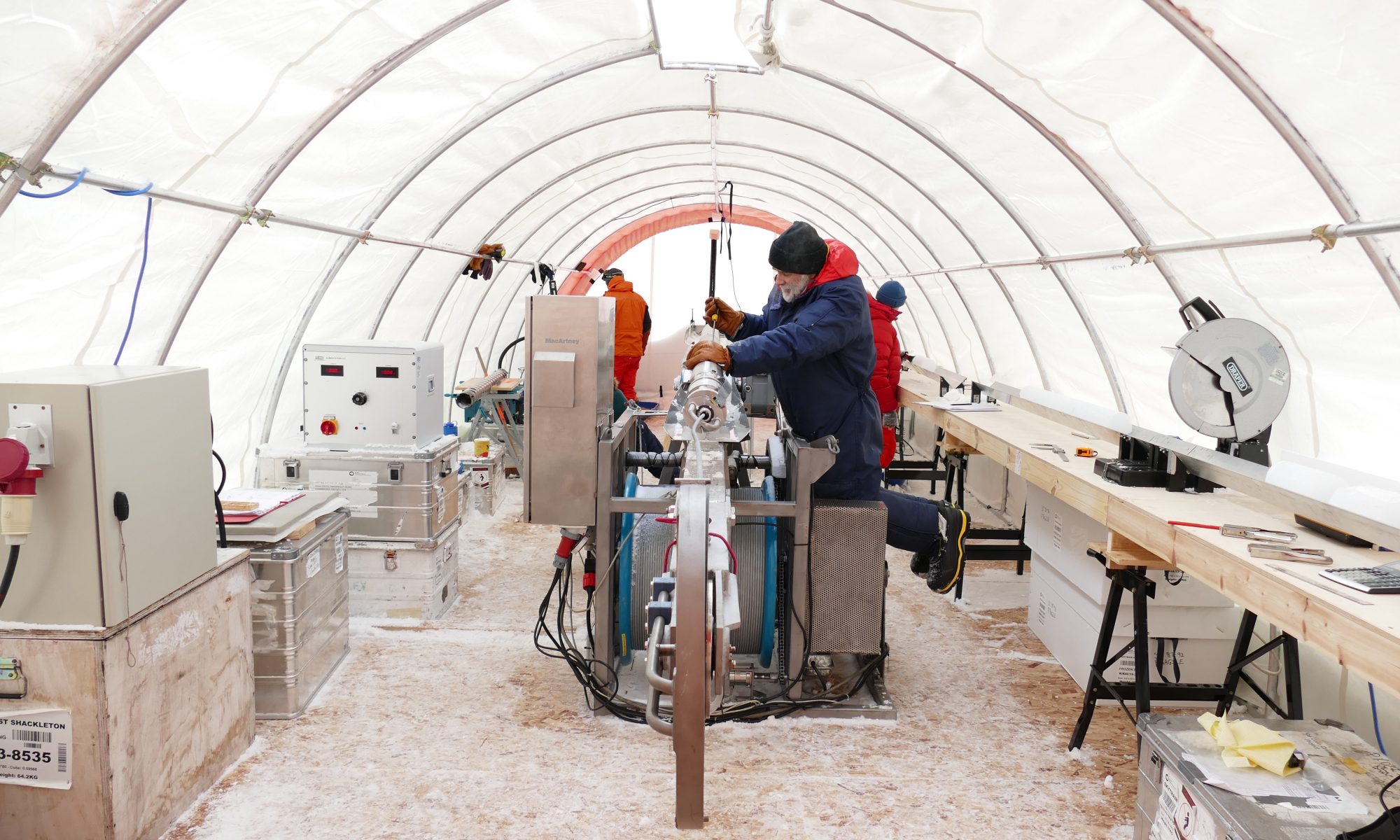 In my last blog I wrote about all the expertise needed to get us into the field. Well finally eight of us, including me, have reached Skytrain Ice Rise, and are experiencing all the steps needed before we can drill an ice core.

Field leader Robert and field guide Caspar were the first to arrive, followed by engineer Julius and analytical chemist Becky. By the time I arrived with engineer Scott and post docs Mackenzie and Christoph, the camp was already set up with a flagged ski way for the Twin Otter aircraft, four orange pyramid tents for sleeping, a long semi-cylindrical Weatherhaven tent for eating and socialising and (sorry to mention it) a toilet tent.

Skytrain is really remote, a further two hours beyond the British Antarctic Survey staging post of Skyblu, and at nearly 80 degrees south. So far it’s turned out to be a windy place, with lots of blowing snow creating lots of snow management issues for Caspar to deal with (the snow forms deep wind tails that make walking from tent to tent hard work).

We’re only able to communicate through the slow Iridium satellite system, so please forgive the low resolution images. Each small photo still takes two or three minutes of satellite time to send!

Work for all of us has been about preparing for drilling, and making the camp more comfortable. The engineers have been spending time on technical issues such as setting up the generator to power our ice drill, and building up the drill system itself. But as an academic without specific engineering or field skills, I have turned my hand to any number of physical activities, many of them involving digging and lifting.

One day some of us were building a plywood-on-wood roof for the ice core boxes we will need to store cold under the snow surface. I have taken part in building a number of large semi-cylindrical tents – for the drill, the generator, and for engineering with drill components. I have driven a snowmobile back and forth from the line of cargo placed here a year ago, to take boxes to the drill tent. I have unloaded Twin Otter aircraft, and even taken a spade to the landing area to remove bumps that make landing difficult. Finally today, a team of us dug a slot half a metre wide and over three metres deep underneath the drill tent – this allows the drill itself to rotate from its horizontal position (where we can remove ice cores) to the vertical one (where we can drill them).

The other time-consuming task is to keep warm and nourished. We sleep in two-person pyramid tents, and it takes a long time each evening to get the tent warm from a paraffin-fuelled Tilly lamp, hang clothes to dry in the top of the tent, and get into the sleeping bag. And it takes the same time to reverse the process each morning and get the courage to poke my head out of the tent and head for the leisure tent where I can have breakfast.

This may not seem like normal tasks for a Cambridge academic but it’s all part of what has to be done to get the precious ice samples that I expect will answer questions about the stability of the West Antarctic Ice Sheet. In my next blog, I hope to describe the drilling and core processing itself. Meanwhile, it’s time to trek through the snow to my tent…

One Reply to “WACSWAIN Drill Log: making camp in the Antarctic”