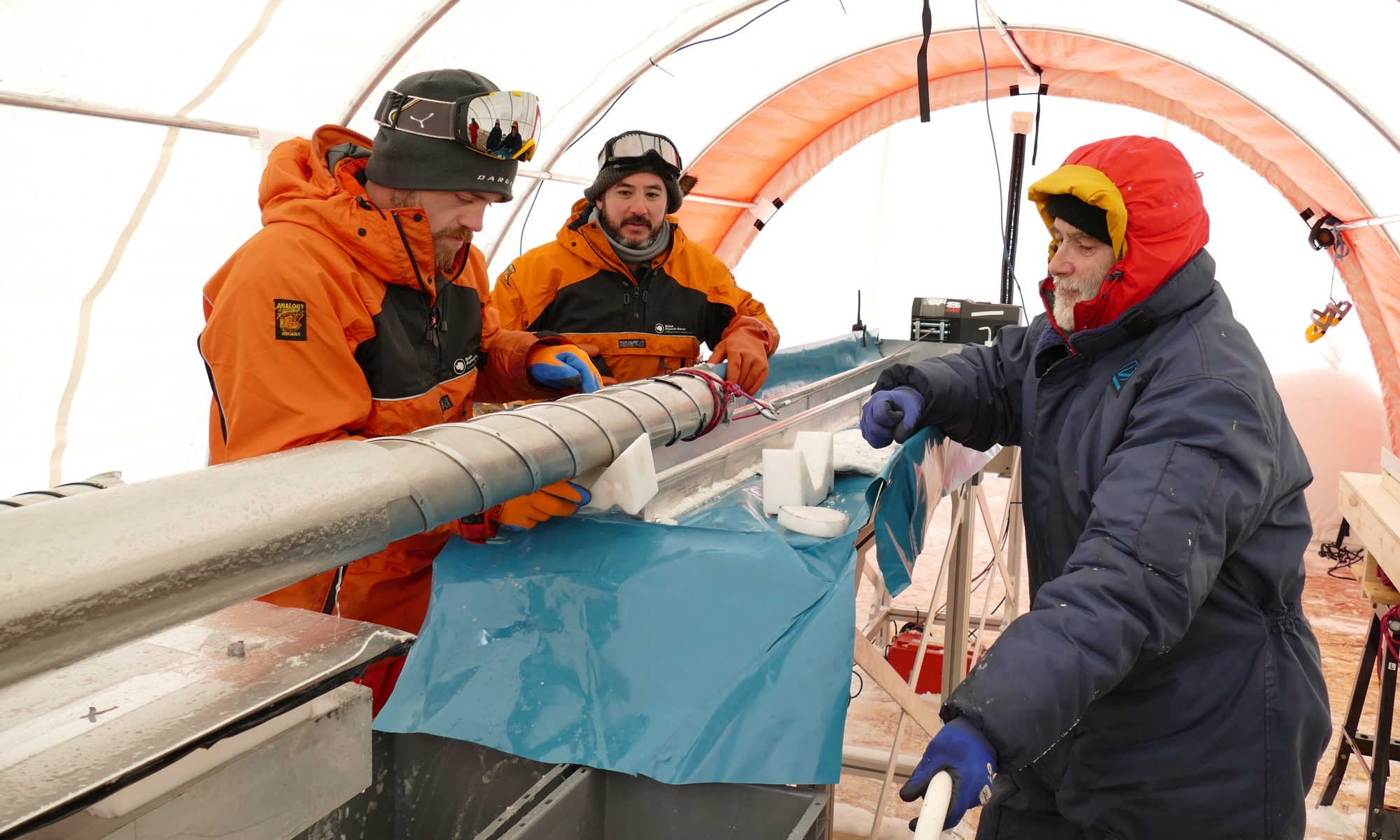 In order to achieve our goal of retrieving ice that is 130,000 years old, we need to drill a core to the bottom of the ice cap we’re camping on, through about 620 m of ice. All the work so far has been preparation for drilling, so what does the drilling actually involve?

The end product is a continuous cylinder of ice about 9.8 cm in diameter reaching from the surface to the bed. To obtain this, we use an electromechanical coring drill which hangs from a cable long enough to reach the bottom of the ice sheet. The bottom end consists of two cylinders. The inner one has three cutting teeth arranged around the outside at its bottom end. These cut a ring of ice chips, leaving a cylinder of ice in the middle. The chips pass along a spiral between the inner and outer barrel and are transported to a chip chamber above the core section. A motor rotates the inner barrel to provide the cutting power, and three large springs at the top of the assembly hold the drill against the wall of the hole that has already been drilled. Finally, I have not yet mentioned that, once we are below the unconsolidated “firn”, we fill the hole with a fluid that is of a similar density to ice, thus keeping the hole from closing, and that also helps transport the chips towards their chamber.

So this was a complex explanation for those who are interested. But what does it involve for us doing the drilling? We are working in two teams of three, each working two 4 hour shifts, so that we drill for 16 hours per day. I am in the shift that drills from midday until 4 pm and from 8 pm until midnight. At noon, I trudge through soft snow to the drilling tent (a long semi-cylindrical tent), dressed in the warm overalls I need to spend 4 hours standing around at -15 degrees.

A cycle of drilling starts with the drill fully assembled on the surface and vertical. One person sits at the drill console, and controls the speed of the winch that lowers the cable, and the motor that rotates the drill barrel. Firstly the operator lowers the drill on its cable – first slowly as it enters the hole, then faster until it reaches the level of the drill fluid, and finally the bottom of the hole drilled so far. They then start the motor so that drilling begins. Typically it is possible to drill an increment of 1.4 metres each time the drill is lowered; this takes a few minutes. The driller checks that the drill is not drawing excessive current, which would imply a problem. Once they have finished drilling, they raise the cable to break the core on the core catchers at the bottom of the drill, and raise the whole drill to the surface. The final control allows the driller to rotate the drill to horizontal, so that they can remove the inner barrel from the outer.

Now some frantic activity starts. If we are lucky we see ice in the barrel. The drill is cold as it has spent time in the interior of the ice sheet where the temperature is -26 degrees. We push the core out of the barrel onto a processing tray. The processor measures the length of the core. It is normally possible to rotate the new core so that the break fits perfectly against the lower end of the previous core. We can then mark off and cut 80 cm lengths for packing. The processor measures the diameter and weight of the core so we can check the density, and importantly numbers the core and marks it with an arrow pointing to the top: we don’t want to turn 50 years upside down! The processor then packs it in a polyethylene sleeve that was pre-labelled last summer in Cambridge. 6 of these 80 cm lengths go into each insulated core box, which is then taken to the cold under-ice store we have cut. Meanwhile, an engineer is checking all the important components of the drill, greasing appropriate parts, and reassembling the drill, before rotating it back to vertical and drilling again.

In a good day we can drill about 25 m of core, but this will slow as we get deeper and just winching the core to 600 m will take extra time. Occasional engineering issues arise which require careful maintenance, and which slow our progress. But slowly we are turning a 600 m ice cap into 80 cm lengths of core representing the last 130,000 years. The cores will be transported by ship at -20 degrees to the UK. Next summer we will open the bags and start to analyse the ice to reveal the secrets of the climate and the status of the West Antarctic Ice Sheet. But that will be the subject of a later blog; now I have to go and start my next shift…