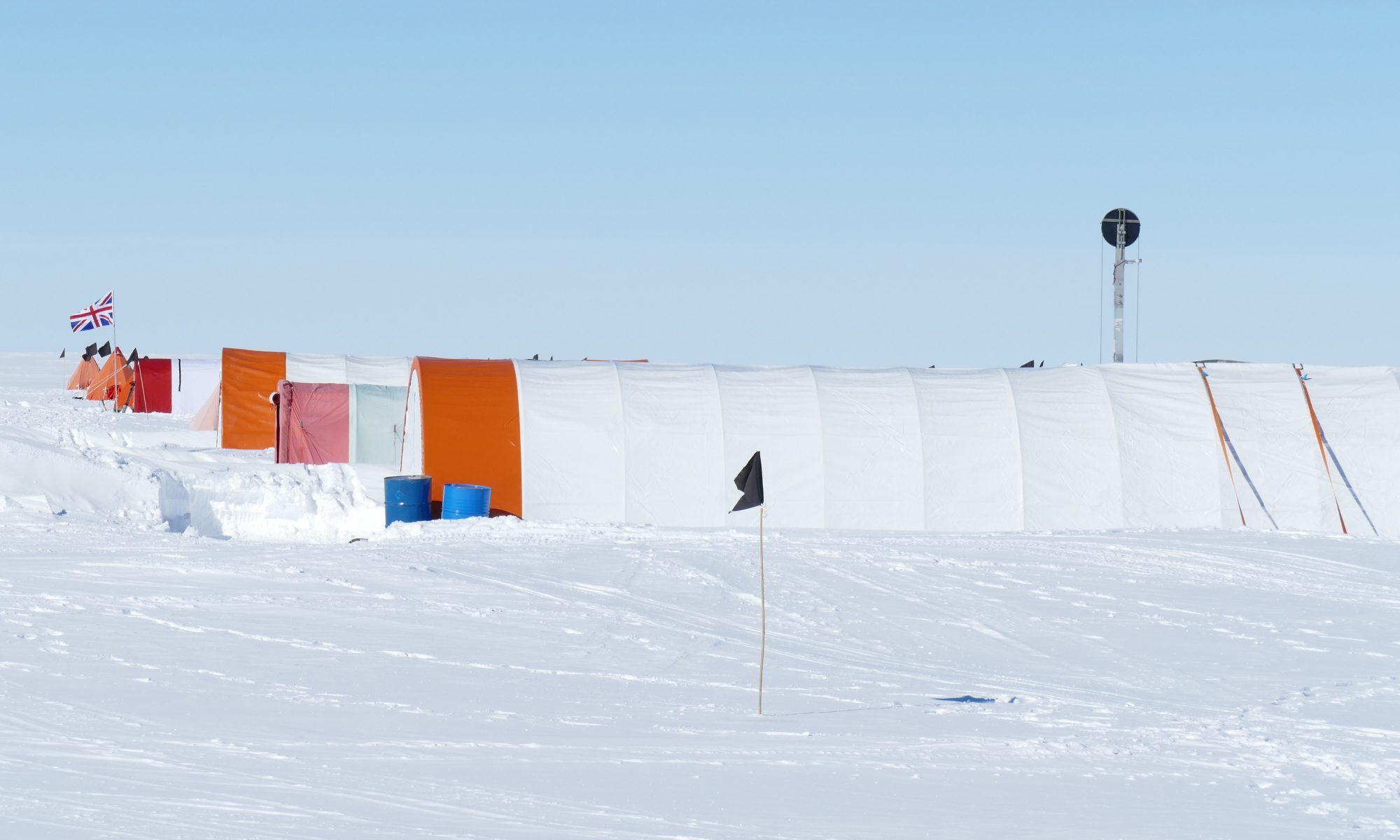 The aim of our fieldwork in Antarctica is to retrieve an ice core reaching through the entire depth of the ice cap on Skytrain Ice Rise, to obtain ice extending at least 130,000 years back in time. Last night, on Tuesday 7 January, we succeeded. The feeling of elation is all around me, with all six members of the party relieved and excited.

We know we have reached the bottom because the last metre of ice we drilled contained pebbles some millimetres across, and in the last few centimetres a yellow layer. There might still be a few centimetres of ice left, but its stratigraphy will be disturbed so we have all the ice that will yield climatic information. The depth we have reached is 651.04 metres. This took us 42 days of drilling 16 hours per day, with just a break on Christmas Day and Saturday evenings. The drill went down the hole over 600 times and never became totally routine. New engineering challenges had to be solved most days, and I now realise what expertise and endurance go into obtaining the cores my team will analyse.

However now we have the material, stored in 136 insulated boxes each containing six 0.8 metre lengths. These are being transported from here to freezer containers at the station and eventually on a ship that will take them, at -20°C, back to the UK. Next spring and summer we will start the major task of cutting them into sections for analysis, spending many hours in the cold rooms in Cambridge. We’ll then carry out analysis of the chemical content and the air bubbles in the ice.

So what’s it all for? The ice should extend right through the last glacial period (colder than present) that occurred between about 15,000 and 110,000 years ago, into and beyond the last interglacial, 125,000 years ago, when other cores have told us that Antarctica was warmer than present. This warmth was not due to greenhouse gases affecting global climate, but was a regional change due to Earth’s orbit and ocean circulation being different from today. However the result was that Antarctica was about as warm as we expect it to be in 100 years from now if emissions of greenhouse gases are not halted. The ice from the last interglacial will be compressed so it’s the deepest 50 metres or so that are of most interest.

By analysing that ice, we will not only learn about the climate but also what happened to the neighbouring West Antarctic Ice Sheet (WAIS). This is a crucial question because records of past sea level suggest that it was six to nine metres higher than today 125,000 years ago, which has led to a suspicion that the WAIS was significantly smaller. Establishing whether this was really the case will tell us how concerned to be about the WAIS and its effect on future sea level.

We will make many measurements on the ice. One very important one will be to measure chemicals that come from seawater and sea ice. Currently our site is many hundreds of kilometres from the ocean, with the vast Ronne Ice Shelf in between. If that ice shelf disappeared as some ice sheet models suggest happened in the last interglacial, our site would have been only tens of kilometres from the sea. Our data will show us whether this happened, and if so, when, and under what climate conditions. Measurements of the ratio of different isotopes in water (ice) will be compared with data from other Antarctic sites for the same period and should indicate whether the WAIS was present at today’s size or not. Another measurement will show us whether the altitude of the site changed significantly as the ice sheet waxed and waned (this was the inspiration for the rather complicated acronym, WACSWAIN, for our project).

The data we will obtain will add real insight into the past and future stability of the WAIS. Of course when we have some data, I will write again to explain our findings. For now we are just happy that the first prerequisite, obtaining the core, is successfully completed. Now I’m looking forward to returning from what is a beautiful but harsh field site, and to having my first shower and complete change of clothes for 2 months. But perhaps that is too much information…