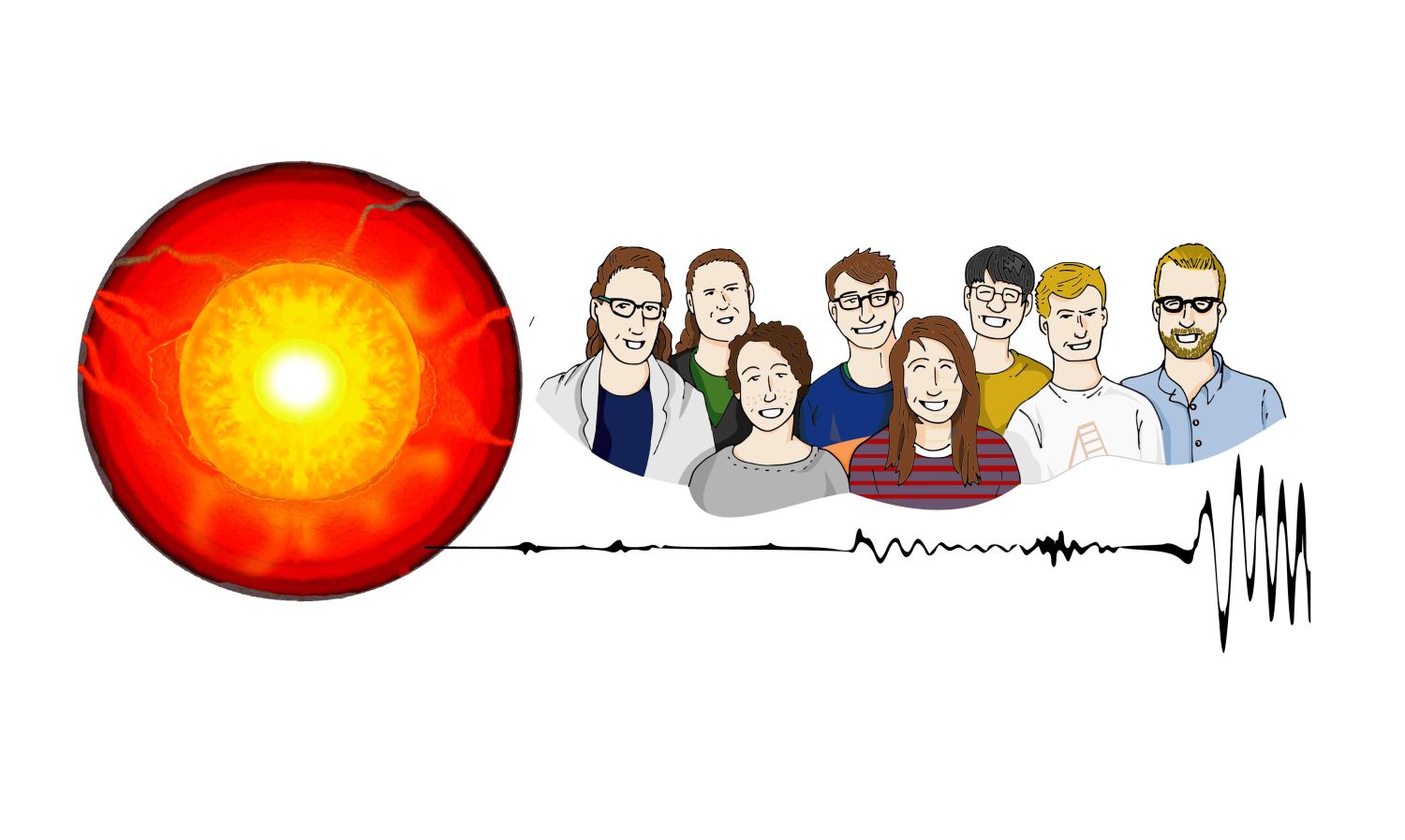 In this blog post, Jess Bartlet answers questions about her experiences as a Public Engagement Coordinator within Dr Sanne Cottaar’s deep Earth research group. Together, they seek to unravel and expose the mysteries of the Earth, thousands of kilometres beneath our feet. Working with the Sedgwick Museum of Earth Sciences, Jess is developing a series of interactive exhibits and hands-on activities to plunge the general public deep into the Earth’s interior from March 2020.

This summer, Jess joined the deep Earth research group in Cambridge, affectionately known as the Deep Earth Explorers, to help them convey their work to the general public. As seismologists they use earthquakes to investigate the structure of the deep Earth.

What do you mean by the deep Earth?
The Earth has a radius of approx. 6371 kilometres. All material below the crust, i.e. below about 30 kilometres, is considered to be part of the deep Earth.

What inspires the Deep Earth Explorers to study the deep Earth?
The Earth is an incredible place; as far as we know it is the only planet in space that can support complex life. When it comes to the Earth and its large-scale processes, there is still a lot to be understood. Humans have literally barely scratched the surface of the Earth. Our mining and drilling efforts are typically kilometres deep, with the world’s deepest borehole reaching only around 12 km depth. The remaining 99.8% of Earth’s radius is untouched by humanity. Many questions about how our planet works remain unanswered. As the research group slowly piece together clues from the deeper Earth, we understand more about our planet: its formation, how it is slowly changing over time; how it works today; and what it might look like in the future.

How do the researchers in your team learn about the secrets of the deep Earth?
Even though earthquakes are destructive events they can provide us with the ‘eyes’ needed for the researchers to see inside the deep Earth.  They make observations from earthquake waves arriving at seismometers around the world to carefully map out the Earth’s interior structure. One of the mysteries found in this way, are two giant mountains, up to hundreds of kilometres high, of anomalous material sitting on the core-mantle boundary.  The nature of these structures, and the role that they play in Earth’s history are still up for debate.

What do we get to see and do in the research exhibition?
In the research exhibition, we will introduce some of the fascinating quirks, and mysterious features of the deep Earth. The Earth is dynamic: moving and slowly changing. There is a lot more going on down there than its often-simplified structure would suggest. We have created interactive examples of how deep Earth processes have shaped the surface as we know it today. The public can peer into, and read, a 3-D globe as a book; make Earth’s mantle move with playful swells of convection; and trigger seismic waves that ripple throughout the Earth. We are keen to open-up conversation with the public about the team’s research, and address their curiosities, including what life is like as a researcher.

How did you design the research exhibition?
The researchers initially led the design of the exhibits and resulting activities. Then feedback from the general public, and collaboration between Sedgwick Museum staff, Amalgam modelmakers, and myself has further developed the displays and programmes. Over the past months, the exhibition has been constantly changing as we sought to balance the level of detail that the researchers want to display, with the level of complexity that is actually accessible by a non-scientist audience. We encouraged visitors in the museum to interact with the exhibits and asked them for their opinions. This feedback helped guide the content and the instructions for our interactive exhibits. For example, we gave some of the features in our Earth Model exhibit nicknames: ‘Deep Mantle Mountains’ rather than the scientific acronym of LLVPs, and ‘Mantle Plume Anchors’ as opposed to ULVZs.

When can we visit the interactive exhibition, or take part in the hands-on activities?
The Deep Earth Explorer research exhibition will be launched to the general public in the Sedgwick Museum of Earth Sciences on Saturday 7th March 2020. We will be running some exciting, free, hands-on activities where children can become Deep Earth Explorers themselves on Super Science Saturday (14th March 2020) as part of the Cambridge Science Festival.

This research and public engagement has been made possible thanks to funding from the European Research Council, the Natural Environment Research Council, and the Royal Astronomical Society. The Deep Earth Explorer team would also like to thank Dr Gautier Nicoli for his illustrations across our programmes.