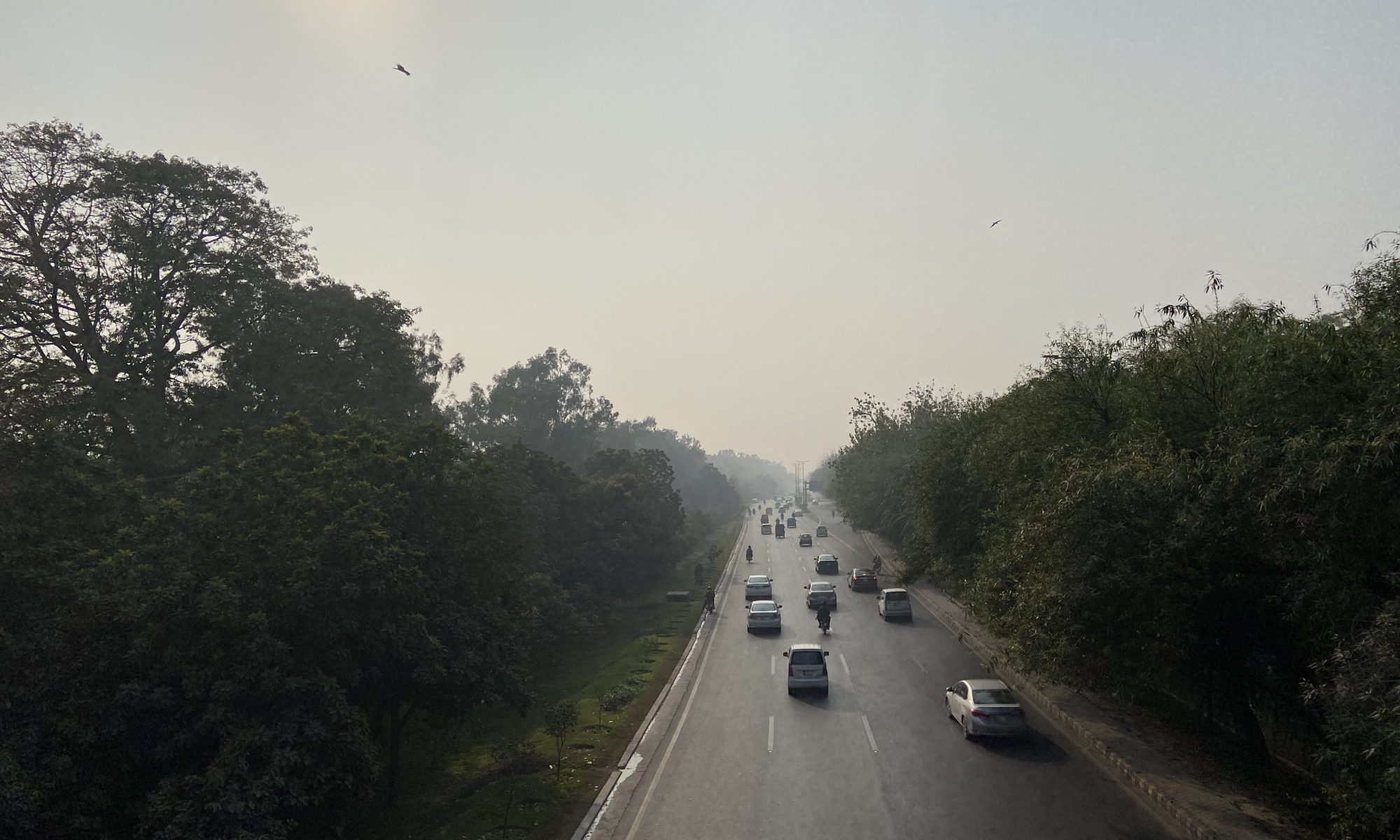 Hassan Aftab Sheikh is a first-year PhD student in the Department of Earth Sciences, researching air pollution mitigation. Erin caught up with Hassan and heard more about his interest in climate science in the following blog post.

Tell me about your PhD research?

My project is investigating whether leaves can be used to monitor air quality and mitigate pollution. Airborne particulates from exhaust fumes, screeching brake pads and the industrial sector all leave a residue on the surface of leaves. These particles, which measure less than a billionth of a metre, are becoming more common in built up areas and are particularly dangerous because they can pass more easily into the respiratory system. We hope to be able to use that residue to monitor pollution at a very high-resolution scale, with the aim of saying not just how much is in the air but where the pollution is actually coming from.

Conventional air pollution monitoring tells you how much particulate matter is in the air, including  concentrations of the volatile organic compounds like sulphur and nitrogen oxides which can help particles form, but it doesn’t tell you about the chemical composition of those particles – exactly what it is you are breathing in.

The idea we are developing is that leaves can also be used, not only to measure concentrations of airborne particles, but also to trap and filter them out. My project aims to build on the existing research on this — using both microscopy and magnetic measurements to characterize the particles. Certain leaves are better at accumulating particulate matter than others, some have fine hairs whilst others have a waxier coating, so I’ll also be looking at which tree species capture particles best, and whether the trees should be grown to a specific height.

What about your work with the Cambridge Centre for Risk?

I came to Cambridge’s Department of Earth Sciences as a masters student on the MASt course – a half research, half taught program. I remember taking one of the papers on natural hazards – I was already interested in climate risk – but there were two seminars from Judge Business School that really inspired me. After exams I didn’t have anything lined up, so I got in touch with the speakers and managed to get a position at the Cambridge Centre for Risk as a climate researcher for 4 months over the summer. I got a totally different view on climate science, working mostly on physical risk and policy. I spent time analyzing data and thinking about how hazards like extreme weather events can affect business supply chains and how organizations can ready themselves for climate change.

It was definitely a case of applying my knowledge to real world problems, and doing that internship has really changed my research approach – I really want to steer my own work towards mitigation and policy. I’m really fortunate to have made that connection, and still work for them as an consultant advisor from time to time.

When I chose geology I originally wanted to work in the oil and gas industry, I actually had a PhD lined up to study enhanced oil recovery. But then I got an offer to study the MASt course at Cambridge. That transition was a key period for me, there was so much going on at Cambridge – it really opened my eyes to the breadth of earth sciences. I picked all of the interdisciplinary papers that interested me, mainly so I could sample the work going on in the different departments! I was based in Physics for the renewable energy paper, Chemistry for atmospheric chemistry and Earth Sciences for the carbon cycle and natural hazards papers. My geology undergraduate was quite broad, and didn’t involve a lot of physics or chemistry, but I found it easy to apply my wider knowledge to this range of topics.

I spent my first term of the MASt immersing myself in research. I was investigating Apollo 17 samples – it was so cool to work with real moon samples! I made some of the first 3D X-ray tomography measurements of lunar rocks to test whether their palaeointensity can be used as a reliable tool to understand the moon’s magnetic history.

Around this time I also started working on a couple of volunteer projects – including the student-led consultancy Climate Crisis Foundation, which looked at fundraising for climate change charities, and setting up the Cambridge Carbon Map. I got involved in as much as possible during that period, and the climate science I encountered is really what got me hooked.

Tell me more about your work with the Cambridge Carbon Map

I came to the project through working with the Big Cambridge Climate Conversation (BC4) which aims to bridge the gap between the town and University in climate action. I think it’s projects like this that really connected me with climate science – seeing how these issues come together and impact people, and working to try and help inform people’s decisions. We designed the Cambridge Carbon Map so that users could easily see and compare emissions from across the city. Our aim is to try and nudge organizations towards a zero carbon future, making information like this more transparent.

What advice would you give to students interested in both earth and climate science?

Follow what you are interested in – and if you can’t initially find the nexus between subjects then just keep exploring and asking questions, it will be there. Earth sciences is really applicable to understanding and resolving so many real world problems – sustainable resources for green energy transition, natural hazards, mitigation of anthropogenic pollution. The subject has given me a toolkit with which to understand how the world works, and that I can use to test ideas and solutions in the real world. No matter what science background you have, I found that at Cambridge there is so much going on that you can find whatever interests you and connect with the right people. What really helped me was reaching out – email people, strike up a conversation and don’t be afraid to put yourself out there!