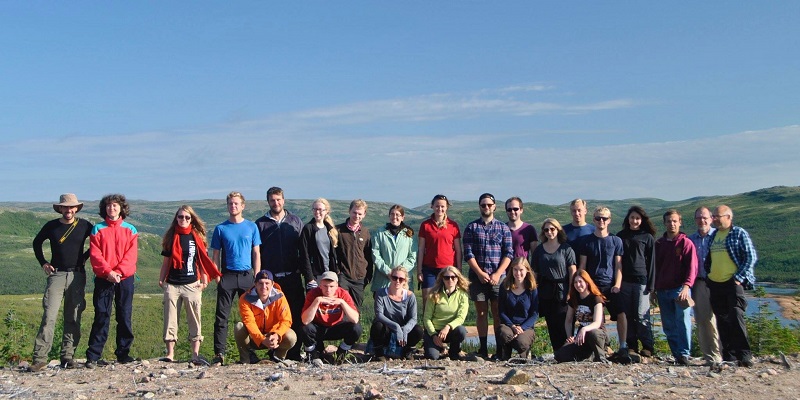 Having a career as a geologist in the oil industry, I get my excitement from working on data from all over the world. However, there is only one thing better than this, which is to actually see the data in its original setting as rocks in the field. Hence when the Cambridge Department of Earth Sciences invited me along to the Earth System Science Doctoral Training Partnership (ESS DTP) field trip, I naturally jumped at the chance.
I have long been interested in the Newfoundland and Labrador area, trying to understand if these regions were close enough to the Rockall Basin during the Cretaceous, to be provenance areas for Rockall reservoirs and share similar hydrocarbon source rock. A field trip to one of my industry areas of interest was too good an opportunity to miss.

Much of what I do day to day in the office is to understand the presence and quality of the five key elements in a petroleum system, namely, reservoir, seal, source rock, hydrocarbon migration and trap. Though the focus of the DTP trip was the Cambrian and Ordovician rock succession, there were still aspects which enabled me to investigate the hydrocarbon potential of onshore Western Newfoundland. At Green Point, we found the first of many ‘holy grails’ for the budding geologist. By placing a finger on the bed labelled ‘23’ by Canadian researchers, we were able to touch the Cambrian and Ordovician boundary, evidenced in the lab by the first appearance of conodont Iapetognathus fluctivagus. These Cambro-Ordovician Cow Head Group shales not only represent a thick accumulation of continental slope sediments in the former Iapetus Ocean, but also potential hydrocarbon source rocks. The very dark grey colour of these marine beds also indicates sufficient Total Organic Carbon (TOC) present for them to act as a good quality oil and gas prone source rock when buried to sufficient depths for oil generation.

This is backed up by the occurrence of the bitumen seeps we saw at Bottle Cove and reports of oil seeps in community water wells in the nearby town of Parson’s Pond.

Lunch at The Arches Provincial Park gave ample opportunity for a swim and time for the more nimble to rock climb over dolomitised Cow Head conglomerate and carbonate sandstone. Dolomitisation of these sediments has led to porosity development with this very porous nature giving them potential as hydrocarbon reservoirs. Many trapping styles are also possible in this structurally complex terrain, probably related to the thrusting, faulting and folding, some of which we saw, caused by the closure of the Iapetus Ocean.

For many months last year, I investigated whether microbial build ups could form the reservoir of a large hydrocarbon prospect in Africa. I was therefore thrilled to be able to see first-hand microbilite build-ups in the form of Cambrian Thrombolites at Flower’s Cove. Thrombolites are limestone mounds formed by colonies of ocean-dwelling microbes in an inner shelf-littoral setting so that the broad, flat tops of these macaroon-like build ups were just covered at low tide. In the Gulf of Mexico, Thrombolites, forming part of the Upper Jurassic Smackover microbial build ups, have been an oil exploration target for over 40 years, with high production achieved from these reservoirs. The exploration challenge in drilling a successful hydrocarbon well into a Thrombolite reservoir, is to identify and delineate these features on seismic data. The chance to study thrombolite preserved in the field not only helped me, but also the students to gain a better understanding of the geometries, areal extents and facies relationships of these iconic features.

When undertaking basin modelling of a frontier area for hydrocarbon potential, I spend much time running sensitivities on heat flow calculations, which govern the maturity of potential source rocks. Over the years, we have started to realise that the variation in the composition, and hence conductivity, of the continental and oceanic crust can affect heat flow considerably. The chance to investigate the Bay of Islands ophiolite was a good opportunity to study the layers present in a well-preserved ophiolite suite. A hike through the tablelands area enabled us to see well-exposed altered peridotites of the mantle section and overlying gabbros of the oceanic crust layer. We were even able to walk between the two, along the Palaeozoic Mohorovicic Discontinuity. Certainly another first on this trip for all of us! Dolerite dykes and pillow lavas, which form the upper most part of the oceanic crust, were also evident across the bay at Bottle Cove.

Whilst the rock exposures on the field trip were my main interest, I also benefited greatly by talking to the graduate students. It was lovely to hear about the exciting NERC-sponsored PhD projects being undertaken and learn some of the new ideas being formulated. The opportunity to be taught about plants and animals from knowledgeable students in those fields, plus also the chance to visit sites relating to Canadian history, Basque Whaling and Viking settlement also gave a broad interest to everyone on the trip. In the electronic era in which we live it is important that we all take time to learn something spontaneously about culture and the natural world first-hand from others otherwise these skills will become lost.

Finally my thanks are due to Neil Davies and Simon Redfern for organising and leading such an excellent, informative trip. I would also like to thank the graduate students for their interesting discussions in the field and for providing excellent evening entertainment. I would definitely have paid good money to listen to the evening of popular songs around the camp fire, the Dickie and Rickie comedy sketch about the drying of Kathy’s socks and eat the imaginatively-named camping meals. Your enthusiasm and creativity shone through!

For those of you who speak french, Sarah-Jane covers the trip here.