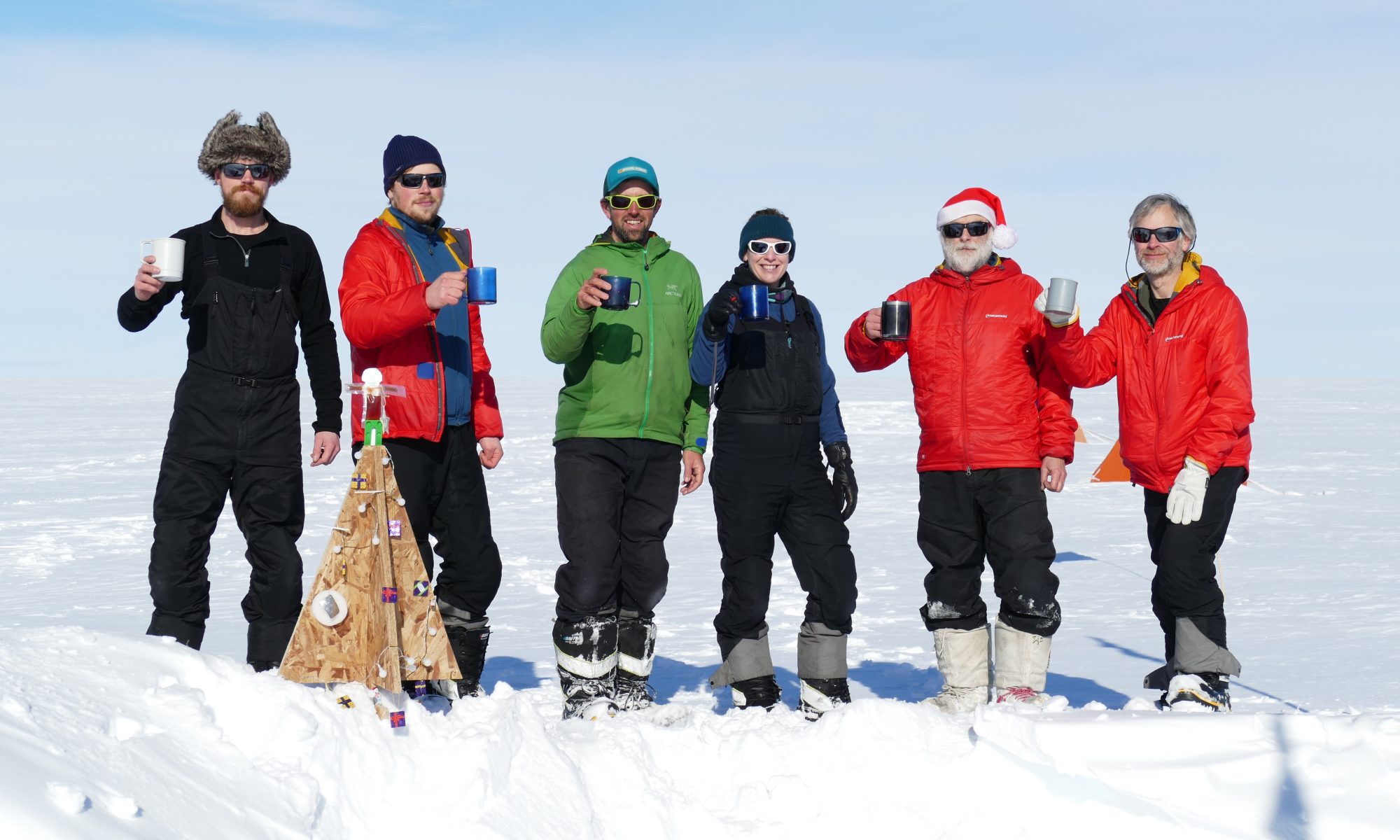 We’ve now been at Skytrain Ice Rise in Antarctica for about 6 weeks. In previous blogs, I have written about the life in camp and the drilling. Now, just after Christmas, it’s time to take stock of what we have achieved, and what we are aiming to do.

The target is to drill an ice core to bedrock, at (to our best estimate) 616 metres depth. This will take us through the last interglacial, and beyond 130,000 years, so that we can investigate whether the West Antarctic Ice Sheet was stable in a warm climate.

This is a critical issue for assessing the long term future of sea level in a warming world. According to climate models, snow equivalent to about 20-30 cm of water falls at Skytrain each year. The layers build up on top of each other, and thin with depth, becoming dramatically thinner near the bottom. So it’s really important to us to reach the very bottom because the 20000 year period we are interested in is likely to be found in the bottom 30 metres of ice.

Although we can always hit new technical problems we are now in quite a routine drilling mode where we are achieving more than 15 metres a day. But a huge amount of experience, preparation in the UK, and hard work at the start of the season have got us to this stage. In retrospect, I think we will also remember the site for its conspicuously bad weather – although it is nice as I write, more than half the days have had winds strong enough to cause blowing snow. This has made camp life less comfortable than we would like, and has caused a lot of awkward snowdrifts that make access to our drilling and living tents difficult, maintained only be the efforts of our field guide Caspar with a snowblower.

As I write, we have just lowered the drill down the hole for the 500th time. The repetitive nature of the work and long hours (to ensure we complete the project on time) makes it essential to have time to relax, so a complete day off on Christmas Day was very welcome. We all received messages from our family and friends, and some of us made satellite phone calls.

But of course we had to make our own entertainment. Our engineer Scott has kept the drill going, but turned his talents to making a tree out of wooden board material. Caspar produced frozen food (including chicken breasts and a cheeseboard) that he’d been keeping hidden. And we all joined in making imaginative use of our field food to create things approximating Christmas pudding and other traditional treats. The six of us sat around the table together, eating and enjoying the wine box (frozen bottles would explode as the ice formed) we had with us. The weather obliged with a sunny evening as you can see on the group photo we took and posted on Twitter (@WACSWAIN).

So that was a great interlude, but at 8 am on Boxing Day, Becky and Robert were back on shift, with Christopher, Scott and myself (Eric, logging and processing the core) taking over at noon, and drilling continuing until midnight. According to our estimates that day we were drilling into the transition to the last glacial period, in ice perhaps 15000 years old. The last glacial (or “ice age”) is a term typically used to describe the fact that there was a continental ice sheet over much of North America and Northern Europe, but it was also about 10 degrees colder in Antarctica than it is today.

We have now reached 500 metres, and the end seems in sight, but also scarily distant. Another week of good drilling should take us near the bed and I will certainly write again when and if we are successful, and again explain the science we plan to do on the core. For now, we hope to see small flecks of rock as we reach the bed early in the new year. Happy 2019!