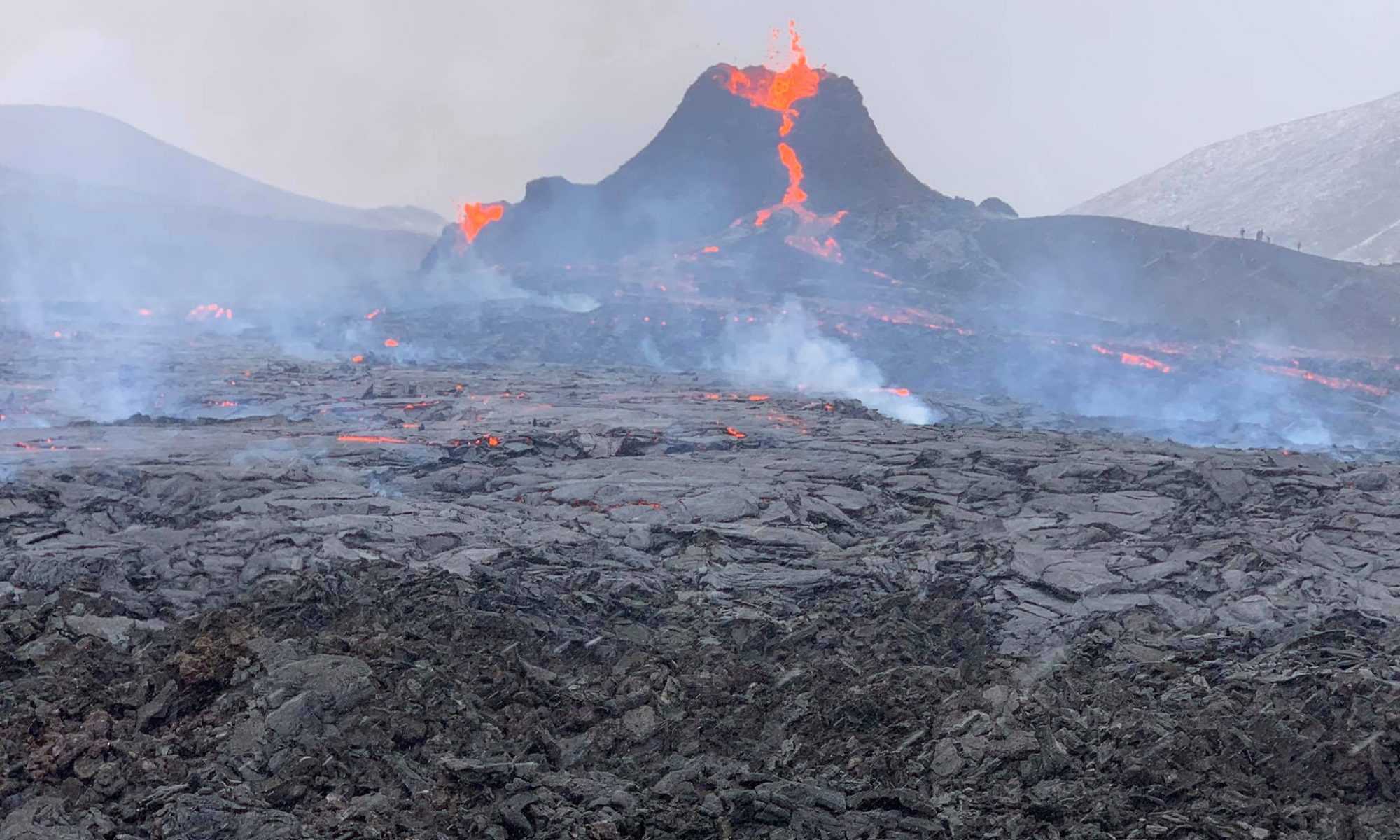 Just hours after Dan Roberts, Masters student at Cambridge Earth Sciences, handed in his dissertation on the seismicity of Reykjanes Peninsula, Iceland, the volcano in his study area erupted… Here Dan reflects on how his work, which employs Cambridge-developed earthquake mapping software, is helping inform our understanding of seismic and volcanic hazards in Iceland.

Were you surprised by the most recent spell of volcanism at Reykjanes?

Having the eruption coincide with my dissertation hand-in has been a surprising and exciting finale to my project! We’ve known that something might happen for the past few weeks, since late February when there was a real surge in seismicity, but it was just a matter of when.

The activity itself, while very exciting, didn’t quite come out of nowhere – the Icelandic Meteorological Office have collected a huge amount of monitoring data, meaning that the underground movement of magma could be mapped and tracked, until its eventual extrusion occurred in an expected area. Iceland is a volcanic island, so this kind of activity is not entirely unexpected – there’s ample evidence of eruptions in the past, though not in the past 800 years in this area – and there have been much larger eruptions in Iceland more recently. This one definitely pales into insignificance in comparison with the 2010 Eyjafjallajökull and 2014-2015 Holuhraun eruptions.

Tell us about your masters project in Iceland

My Masters research used Cambridge-developed software to accurately map the spatial and temporal patterns of earthquakes in the Reykjanes Peninsula, Iceland – where the current eruption is occurring. With this new data and analysis we can see how faulting is tied to regional geological processes like plate spreading, but also more complex and intricate local forces, like smaller dyke intrusions and faulting due to fluid migrating through rocks. The intricacies of how these localised processes impact seismicity and might lead to eruptions are not well understood.

Throughout 2020 there were a series of intrusions of magma beneath the western Reykjanes Peninsula, setting off a series of seismic swarms – mostly small earthquakes caused by stress changes in the crust. I analysed a snapshot of data on the large tremors that occurred between June and August of 2020. We wanted to understand how the peaks and troughs in seismicity were linked to geological forces, and that’s where this new high quality data, and analysis on the precise location of these earthquake tremors, is key.

In hindsight, these swarms were all precursors tracking the geological events leading up to the current eruption, and it’s fantastic to look back and be able to track their evolution throughout the duration of my project. There’s very little data out there that gives this kind of detail in the time period leading up to an eruption – and future research using this data promises to expand our knowledge of the relationship between seismicity and eruptions that follow.

Did you find any unexpected earthquake patterns?

We were able to map quite a few faults that didn’t have any surface expression and therefore weren’t previously known. As well as noting a clear pattern of north-south and northeast-southwest trending faults, caused by stretching in this obliquely spreading part of the mid-Atlantic plate boundary, we also identified other faults that don’t quite align, trending in an ENE (East-Northeast) direction and bisecting the north-south faults. The working hypothesis is that these ENE faults are caused by high pore fluid pressure reducing the normal stress across the faults.

My study area is a really active geothermal area, and the geothermal extraction at Svartsengi (more commonly known as the Blue Lagoon!) has been causing a steady subsidence in the region – it’s likely that the presence of water passing through rocks also impacts local faulting patterns and this is something we hope to learn more about.

How does your research help us understand seismic and volcanic hazards?

People have been plotting where earthquakes happen for a long time, but the novelty here is how precisely we can now do this. Previous studies in the region have obtained earthquake locations accurate to within one to two kilometres, but we’ve managed to reduce this to less than 500 metres. It means we can really get a handle on the seismicity tracking fault movements prior to this eruption, and apply this to our understanding of precursory events in the run-up to future eruptions. The site of the eruption is about 10 kilometres from the nearest town and approximately 30 kilometres from the capital, Reykjavik, so poses little danger other than toxic gas emissions. While the immediate region is pretty low risk at present, there is evidence in the geological record that extensive lava flows have occurred across the Reykjanes Peninsula in the past. Larger eruptions could happen in the future, and data like this helps us understand and prepare for them.

What about the Cambridge-developed software you used?

The data acquisition was all done by Cambridge, with collaboration from the University of Iceland and Iceland GeoSurvey. We have a network of seismometers out in Iceland located over a really compact area – so you can see the spatiotemporal evolution of the earthquakes in more detail, like visualising them with a high-definition TV. The Volcano Seismology Group has been working to maximise the detail we can extract from this seismic data, by developing the QuakeMigrate software package that I used in this project.

QuakeMigrate provides an automatic and efficient tool for detecting and locating earthquakes from wiggles recorded by seismometers. These wiggles (or waveforms) are first converted to smooth functions which peak where P and S wave arrivals are recorded. These are then continuously backpropagated into the subsurface – just like the simple triangulation you might have done with pen and paper at school, but in 3D! Earthquakes are identified where peaks recorded at multiple stations align at a point, revealing the time and location of the event. In my project this picked out swarms of earthquakes that delineate the network of subsurface fractures in the Reykjanes Peninsula, but QuakeMigrate has also been used to detect seismic events of all different types from Pole to Pole! This includes icequakes at the base of glaciers in Greenland & Antarctica, as well as earthquakes at volcanoes in Tanzania, Ethiopia, Bolivia and of course Iceland! We are all very excited to use it to process the data recorded by our network in Reykjanes over the past 6 months, and add yet one more volcano to the list.