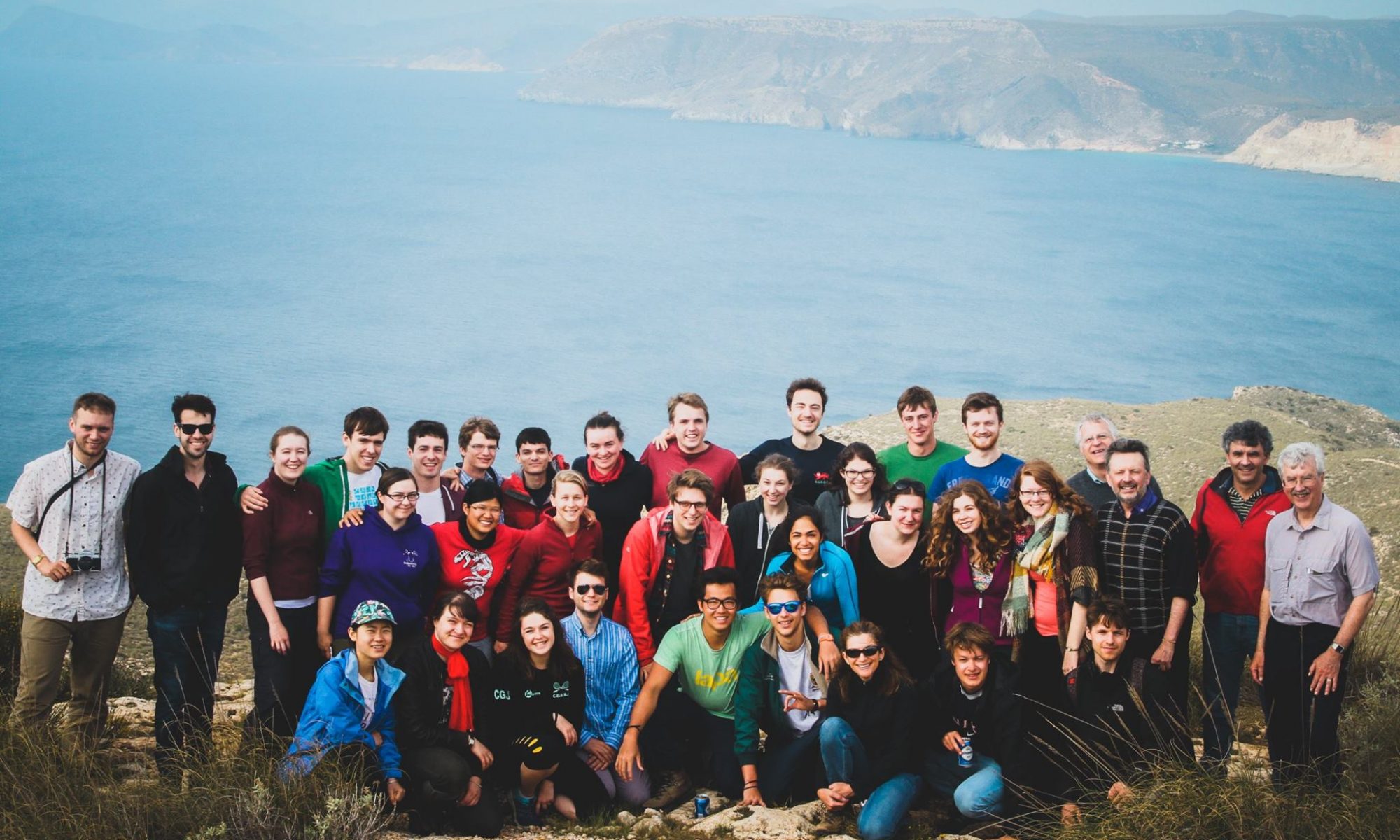 Spain 2016 outshone Spain 2015 the moment the plane took off from Gatwick Airport. David Hodell, our mighty leader, breathed a sigh of relief when French Air Traffic Control decided not to strike at the same time as the Cambridge fourth-year Earth Sciences fieldtrip. 29 students and 8 demonstrators left the drizzle behind us and landed in sunny south-east Spain. A quick change into shorts in the airport loos and we were ready for terrible sunburn.

On our first day in the field, we were studying the basin-and-range style geology of the area. The Sorbas basin was not bounded by normal faults like we had seen in Greece, but some further rotation had taken place. In the afternoon we saw some beautiful metamorphic rocks, with several phases of deformation: schistosity and isoclinal folding; crenulation; a c-s fabric; and finally brittle extension. Everyone enjoyed hearing Tim Holland in his element and even had happy memories of GSB (now ESB).

The next day was gypsum day. Gypsum, gypum, and more gypsum, formed during the Messinian Salinity Crisis. At an outcrop of the Yesares Member we saw a cyclic sequence of gypsum intercalated with pelitic-marl sediments, probably as a result of the Earth’s 21kyr precession cycle. To get a gypsum deposit several metres thick as we observed, it’s not enough to evaporate the entire Mediterranean once. Rather, there must have been a near constant flux accompanied by plenty of evaporation. The evaporites around the Med from the Salinity Crisis have an estimated total volume of 1.1 million cubic kilometres, which accounts for 5% of all the oceans’ salt! After that we were lucky enough to be taken caving with Jose Maria from the University of Almería.  Aquifers had found their way into the soft, interbedded marl, eroding it away and leaving gypsum passages. Crawling into the gloom with our head-torches, we discovered a warren of long caves – the longest is 9km – with 10m pits down to the next layers. Speleothems of gypsum grew – slightly counterintuitively – into the flow of wind down the caves, since gypsum forms by evaporation.

On the following day, we ate lunch in a small village square, whilst watching some school children playing a game a bit like rounders, but kicking a soft football rather than batting. Everyone got very excited, and it worked excellently as a beach game that evening after a day in the field.  The next day had a more dramatic start than intended. Our mighty leader’s van’s back windscreen had an unfortunate meeting with a tree branch in the car park. We were studying the volcanics in the area, which display the calc-alkaline signature of subduction zone lavas. The students were all too happy to point out the glass everywhere in the groundmass of the ignimbrite, not to mention the smashing view of the ancient caldera. Many deposits were from volcanic, andesitic domes. We saw where poorly-sorted lava clasts had formed from fracture of a lava dome’s outer surface before crashing down the talus slope. These outcrops truly offered a window into the past volcanism in the area.

On our penultimate full day in the field, we finally visited the long-awaited ‘garnet volcano’. The garnets didn’t disappoint, littering the floor. There was also some beautiful blue cordierite and biotite-sillimanite xenoliths. That evening we had a huge group barbeque with food ranging from swordfish to chorizo to stuffed peppers. Barbecuing gear consisted of head-torches and swimming goggles (for the smoke, clearly). Our final day in the field saw us take some long, winding roads deep into the metamorphic mountains. Those who’d had one too many sangrias really felt those turns. Our final dinner was an authentic Spanish paella. A slight mellowness hit the group, as everyone realised that their undergraduate field trips together were coming to an end.

On our drive back to the airport we had time for a couple more stops, including to visit the Carboneras fault. As with all geology, there was a great deal of satisfaction as all the outcrops tied together into a (reasonably) coherent story of the region: one of subduction, and slab roll-back (still controversial). Despite complaining about looking at rocks that we hadn’t all seen in two years, I think everyone found a lot of happiness in looking back at everything they’d learnt in four great years at the Cambridge Earth Sciences Department.